Share All sharing options for: The Tape: Four Hooks

Green Bay breaks WR (left), Trips, Rb (Right) with Aaron Rodgers in a shotgun. Cowboys break in a 4-1 dime with Kevin Burnett playing MLB. This is a heavily unbalanced formation, with Greg Jennings alone on the left. At the snap, the play progresses like this. 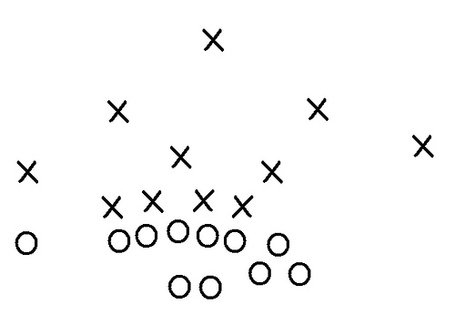 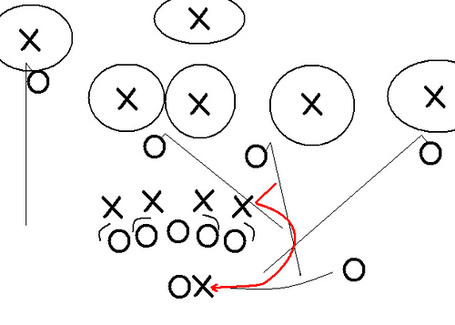 (The spacing is exaggerated to improve clarity)

Jennings runs a lazy route and Rodgers never looks his way. While unbalanced formations are often designed to pull coverage away from the receiver on the lesser side, in this situation it looks like Jennings is the decoy and the trips the target. Rodgers awaits Donald Lee to get open over the middle, but Burnett picks him up and then passes him to Courtney Brown. Dallas is playing a boundary zone - sure that's not the right terminology - but the meaning is conveyed: keep Green Bay out of the end zone. Brandon Jackson is open in the right flat, but Rodgers seems determined to target one of his receivers. Anthony Henry runs into his defensive line, circles out, runs past Jackson, and closes in on Rodgers tackles, spins Rodgers around, falls, Rodgers attempts to recover but takes a knee completing the sack. This plays like the exact wrong play call for Green Bay or the exact right play for Dallas, and though Henry's blitz is anything but clean, Dallas' coverage is so strong Henry eventually finds his mark.