The Tape: The Irreplaceable Julian Peterson

Share All sharing options for: The Tape: The Irreplaceable Julian Peterson

I haven't followed 49ers football, so I'll say my piece and then admit I don't know all the facts, but I can't get over the nigh-unilaterally positive response to Mike Singletary's diatribe. Calling out a player is a true last measure and one typically done with the utmost tact. When Vernon Davis man-slapped Brian Russell, it was with 49 seconds to go in the third, San Francisco down three touchdowns. Their win probability was 4%. After the penalty that dropped ~1%. The team went on to score, so maybe Davis fired his team up. Isn't that the pseudo-psychology we're used to?

I'm from the old school. I believe this: I would rather play with 10 people and just get penalized all the way until we got to do something else, rather than play with 11 when I know that right now that person is not sold out to be a part of this team.

Old school is the neologistic phrase for the millennia old myth of a "Golden Age". It's BS. I digress. The important part is that Singletary accuses Davis of being "not sold out to be a part of this team." Would that be when he ran 70 yards to nearly tackle Josh Wilson to prevent a touchdown? When he accepted a blocking position -- and played it with fire and skill -- in Mike Martz's moronic offense? Or when he busted his ass for two and half years for some of the worst offenses in the NFL? Davis presented an easy scapegoat. Singletary passed blame, a blame a good leader shoulders, on one of his least deserving players. The media might eat that shit up, but I see nothing noble in Singletary's actions.

Cut Julian Peterson: Whenever I mention that Seattle should sincerely consider whether to re-sign Leroy Hill, someone mentions cutting Julian Peterson. The idea is so preposterous I refuse to even respond. Peterson, just thirty and in phenomenal shape, is one of a handful of truly irreplaceable players on Seattle's roster. As a Seahawk, he's yet to miss a game. His contributions are incredibly steady, 10 sacks, 80 tackles, a handful of forced fumbles and a pick or two. Not to mention he's Seattle's second best defensive end. Peterson is the kind of talent that never, ever escapes the first round. He's the insane athlete made good. He gives Seattle scheme versatility and bottled pass rush. He ran around Joe Staley and forced a fumble with Dwight Freeney-like speed and precision. 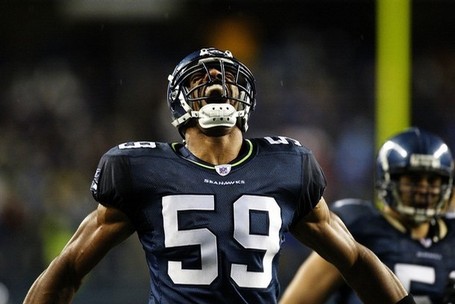 Leroy Hill is a typical, albeit very good linebacker. He tackles downhill and is a quick blitzer. The NFL is overflowing with players of Hill's ilk. He's a younger, quicker Kawika Mitchell. Hill can't play defensive end and can't compare to Peterson against the pass. Fans love tackles, but against the pass, tackles are often bad. Here's the two's total pass plays for the season. S=Successful U=Unsuccessful

Teams have fearlessly targeted Hill. He gets some chase down tackles after blowing coverage, but not always. Hill's only real strength in coverage is screen and outlet passes to the backs. Plays he can run downhill and blow someone up. He's not picking up playing the zone, and I don't think he will. When the time comes, Seattle can find another Leroy Hill. Without much trouble, they can find a reasonable comp run-stopper that's much better in coverage. There's no player in the NFL that can match Peterson's combined abilities as a run stopper, pass rusher and coverage backer. Opportunity for Opportunity, he might be the  best pass rusher in the NFL. Signing Peterson is among Tim Ruskell's finest moves. Instead of accusing him of disappearing or dogging him for being fantastic rather than godlike, Seahawks fans should recognize that Julian Peterson may be the best linebacker in football.