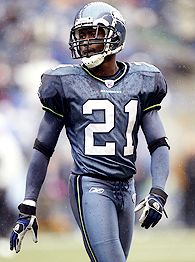 Kelly Jennings performed admirably despite a terrible mismatch. He recorded three good coverages and just one blown coverage. The blown coverage? When Larry Fitzgerald jumped over him.

Jennings had a fine first quarter, including coverage that broke up a touchdown reception and a tackle of -1 yards against Steve Smith. The tackle was especially heartening.

Jennings was lined across from Reche Caldwell for most of the game. Caldwell caught one pass for 7 yards, and was the target of 3 incompletes. Caldwell isn't any great shakes, but Jennings is good. Real good.

Jennings had a couple rough stretches and despite my theorizing otherwise, it's not man but zone coverage that gives him troubles. His worst showing was on the third play of the Steelers first drive of the second quarter backed up within their own ten, third and 3. The Steelers have two receivers bunched left and Seattle is in a 4-2 nickel. Jordan Babineaux and Kelly Jennings are in zone coverage left. Babs interior, Jennings ext--oh wait, no he seems to be playing the interior too. Willie Reid catches the ball in the flat, Jennings breaks on the receiver (at this point the first down is already conceded) throws an awful tackle that slides right off the 186 pound Reid before Reid breaks it for a 25 yard gain. The worst infraction is the blown coverage as once Jennings was near Reid the first down was all but conceded anyway, but the tackle is exactly the type you fear from a slight player like Jennings, not really bad form, just wimpy. Reid barely broke stride slipping past him. Jennings has played well all year and has been a real step up in man coverage from Kelly Herndon, but what he showed on this play isn't something tackle drills can overcome.

Fifth play, third New Orleans drive. First and ten, the Hawks are in a base package w/ Deon Grant playing up. At the snap the Saints left side creates a big mess, Baraka Atkins leveled, Grant flies in, gets picked by Karney and only Kelly Jennings stands between Bush and the sidelines. Jennings takes a miserable angle, again somehow inexplicably underestimating Bush's speed, breaks outside containment and watches Bush dash past him for 22 along the left sideline. It's the first, and hopefully last, time I have pined for Kelly Herndon.

Back to business. Tru played decent. Grant was a non-entity. Russell is the reactionary fling following Ken Hamlin: Where Hamlin lived in the first fifteen yards, Russell rarely strays from 20 yards past the line of scrimmage. It's not the worst thing a safety can do, but it does leave a lot of middle-deep post routes open. Oh, and Jennings played awful. Here's a three play stretch that best summed up Seattle's secondary:

The quiet corner. Noteworthy for being not-noteworthy. Jennings is one of Tim Ruskell's less recognized success stories. Second year corners are supposed to be inconsistent and a little toasty around the edges. Excepting his showing against the Saints, Jennings was a rock. A pillar of basalt, if you will, because if such a thing is possible, Jennings is a thin 178. Jennings open field tackling is, yes, wimpy. Not technically incorrect, but a bit like a superball colliding with an asteroid. The Jennings, Russell, Tapp troika oversaw Seattle's 20th ranked rush D on runs a round left end. A weakness that came to fore facing Green Bay. As hopeless as Jennings looked at times in 2007, I'd put better odds on Jennings filling out enough to put the oomph in his good angles and technically sound tackles than a larger defender acquiring new skills. Jennings is a precocious cover corner. Should he develop some ball skills, watch out. Too good to be so unappreciated.