Below is an essential run play in any zone-blocking scheme. If you are interested in me diagramming a specific play or exhibiting fundamental differences between Greg Knapp's offense and Mike Holmgren's offense, like wide receiver splits, leave a comment and I'll make it the subject of a future post.

Oakland is pinned at its own five. The Raiders set 2 wide receivers, tight end, I-backs. The Chiefs set in a balanced 4-3.

Zach Miller motions in, crosses behind the center and then returns to a recessed position off right tackle. Strong safety Bernard Pollard moves up into the second level. 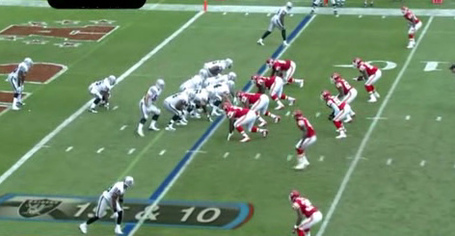 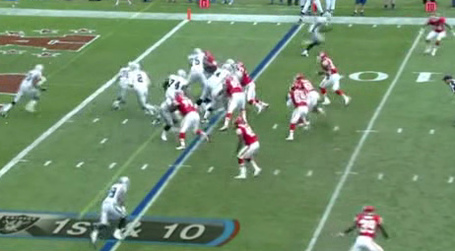 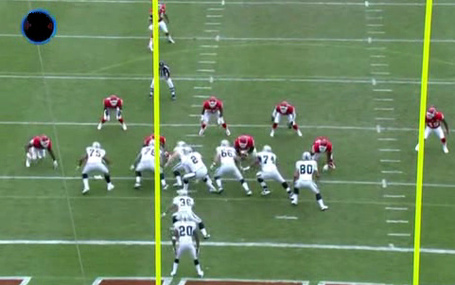 From behind, the essence of this run is revealed. 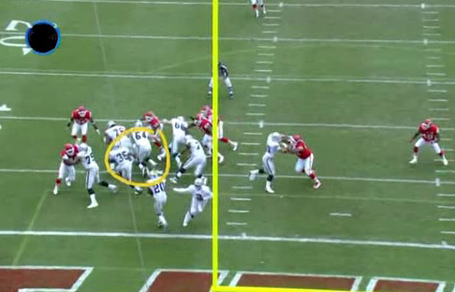 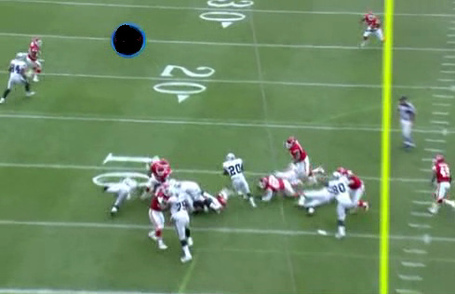 From the scrum a hole emerges Emmitt Smith could run through.

The Zone Stretch is not a play, but a family of plays or, more accurately, the opener for a set of possible runs. Zone blocking empowers linemen to adjust and pick their assignment in response to the defense. A stretch has a few fundamentals: Linemen block one direction, typically the direction of the run; a defensive lineman, typically a defensive tackle and typically the defensive tackle positioned to the side the run is directed, is double teamed; one of the two blockers doubling the defender walls off the defender while the other pulls into the second level. Other rules may be instituted on specific plays, but the elegance of a zone block is that blockers may "audible" their assignment on the go. It's so libertine and spontaneous one wonders how Tim Ruskell ever convinced Mike Holmgren into accepting it.