A Bad Time for an Otherwise Good Decision

Share All sharing options for: A Bad Time for an Otherwise Good Decision

The Seahawks were favorites at home. The defense was not struggling - it had been burdened with two short fields in three drives. Seattle was down fourteen, but it was early in the first and Detroit's offense had shown no signs of being able to run away with the game. Seattle was creating pressure. On the preceding drive, the defense had quickly forced third and ten but was scored on when Bryant Johnson disguised a push-off within a one-handed catch. It was not an egregious no call, but nor was it call to panic.

Seattle had run twice and twice Julius Jones ran into his blockers attempting to find a hole. The interior offensive line was not creating push and, for whatever reason, the Lions linebackers where charging the line. They did not expect Seattle to pass. Matt Hasselbeck finally did pass, but it was a short pass to Justin Forsett and Forsett did the man's working, breaking two tackles to put Seattle within one.

On fourth and one, the Seahawks piled their linemen up and motioned their third tight end in to play fullback. The Lions were standing atop each other to attack the middle. Jones received the snap and ran into a wave of bodies. He wasn't even close. 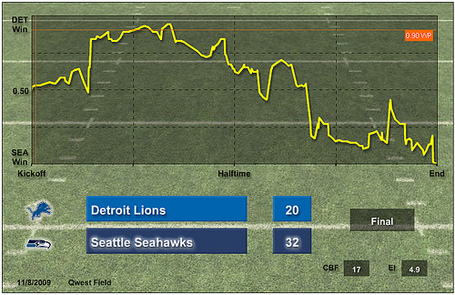 The Lions dinked and dunked their way into, out of and back into field goal range. Before the failed first down attempt, Seattle had but an 11% chance of winning. After the field goal, Seattle had an 11% of winning. The field goal had done little but cash in the field position Seattle had ceded after failing to convert. It underscores just how aggressive coaches should be on fourth down that even a poor decision, poorly planned and poorly executed, didn't bury a team already down 14 in the first. But it was a bad decision and the execution made it worse. Sometimes a coach needs to step back, not consider the game in a global sense, but as it's unfolding, the individual matchups won and lost, punt the damn ball and allow the defense a chance to rally.