Building a Playbook to Beat the Cardinals: Pounding the Ball Behind the Powerlifters

Share All sharing options for: Building a Playbook to Beat the Cardinals: Pounding the Ball Behind the Powerlifters

Sometimes, I, as a fan, ask myself what can I give back to the Seahawks organization? The men and women of the Seahawks give their lives to create Seahawks football, and I spend my life following it. If I could donate a fraction of my time to, not criticizing or commenting about, but helping the Seahawks, shouldn't I? So here goes...

Seattle must win in Arizona to keep the second half of the season exciting. When the Cardinals tore into Qwest and put a boot on the Seahawks offense, it ended the realistic chance Seattle would compete for a playoff spot. But screw realism. I didn't become a fan for rational thought. This Sunday begins the unrealistic, storybook, climatic run towards contention. And I am going to help them start.

The goal over the next two days is simple: construct an offense from and influenced by real Seahawks plays that can beat the Cardinals defense.

The Cardinals have constructed a powerful 3-4 defensive line. Rod Graves drafted Alan Branch and Calais Campbell in the second round. Branch and Campbell team with Darnell Dockett to put about 900 pounds and 19 feet of muscle up front. Branch is a rotational nose, and might play primarily at end because Kenny Iwebema is questionable with a knee injury. However they construct their front, it is the core of their defense and what allows their marginally talented linebackers to dominate the run game.

In their first matchup, Seattle was down 14 before its offense could take the field. We'll assume Seattle overcomes its Dehavenry this game. The Cardinals defended with their base, eight-in-the-box look.

Instead of running play-action, let's attempt an actual run. The Cardinals ability to force runs out wide allows them to overmatch teams. Arizona has five standing defenders in the box. Seattle needs to establish a running presence between the tackles. The design is to run behind left guard. 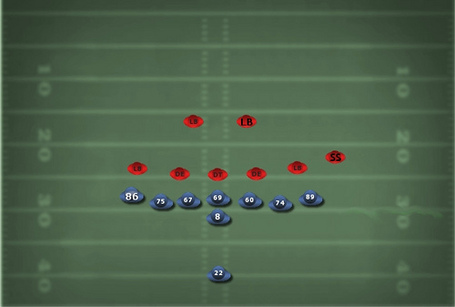 First Seattle motions John Carlson into the right slot. Arizona may then motion Adrian Wilson or Clark Hagans to cover him. It also might not budge. We'll assume that Carlson, sophomore slump and all, is still receiving threat enough to draw Wilson. If he doesn't move or no one moves, the Cardinals might be blitzing off right end. It could be time to audible. 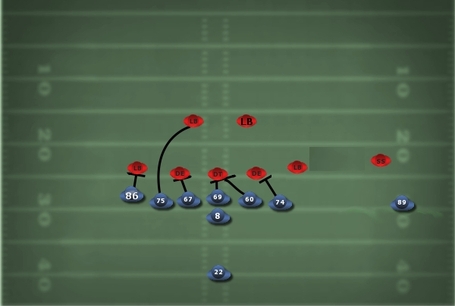 Wilson shadows Carlson. The next thing to do is demonstrate the blocking assignments. The goal is to push the defensive line left and then surge behind it and away from backside pursuit. Rob Sims matches against Campbell or Dockett, depending on the rotation. That is the single most difficult and critical block of this play. 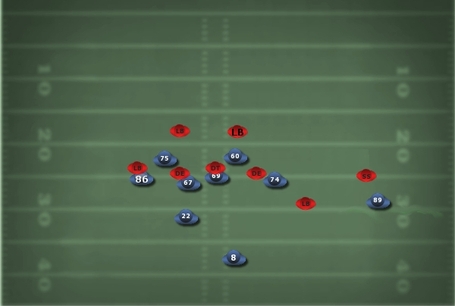 The action has started. Seattle is attacking on multiple fronts, but the Cardinals have counterattacks. Hagans is unblocked and threatening to chase down Julius Jones. Carlson has a bad angle on Wilson and must attempt to cut block. Left inside linebacker Gerald Hayes and right inside linebacker Karlos Dansby are flowing towards Jones. For Seattle to execute properly, Locklear and Max Unger must be able pull into the second level and stop their respective assignments. 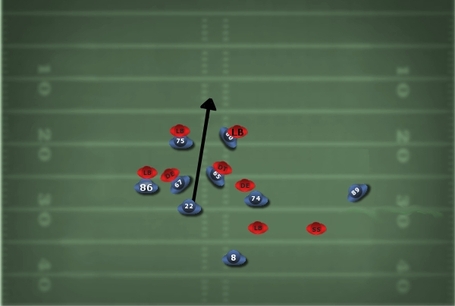 Let us now look at this play a fraction of a second later. Carlson has flopped, slowing but not stopping Wilson. Hagans is in hot pursuit. Dockett has been able to beat Willis on the outside. Not everything is working, but enough has to punch a hole. Spencer has turned nose tackle Bryan Robinson. Sims has down likewise against Campbell. Locklear is blocking down Dansby and Unger has cut Hayes. The path to the second level is paved and Jones must hit the hole hard.

There's nothing especially creative about this play, but it does play Seattle's personnel to their strengths. The hole is built off the Seahawks two most powerful blockers: Sims and Spencer. Locklear has the best balance and footwork and he pulls out and attempts to railroad the linebacker. Unger starts the play by assisting Spencer to get a mean push on Robinson. That double team moves the nose and creates space for Unger to run forward and cut Hayes. Unger is nimble and assignment correct, but not a powerful blocker. Carlson draws Wilson out of the tackle box and can either run off Wilson (against man cover) or cut his path (in zone). The goal is to stop Wilson from chasing the play from behind. Blocking tight end John Owens must only slow Chike Okeafor or Bertrand Berry enough that they are not able to run into the backfield and reroute Jones.

The weakest link is Willis against Dockett. That is why Willis uses his length to tie up and slow Dockett. You can not count on winning every matchup. Seattle needs to win two for this play to work: nose and right defensive end. If it can get that push, Jones will have a hole. It's not sophisticated, but it builds off Seattle's strengths and helps make play action a little less ludicrous.