Building a Playbook to Beat the Cardinals: Streaking Behind a Wall of Blockers

Share All sharing options for: Building a Playbook to Beat the Cardinals: Streaking Behind a Wall of Blockers

To wrap up today's look at winning plays, I illustrate a play I've never seen Seattle run. It's a little radical, but Greg Knapp seems willing to mix it up. This is a screen pass to the receiver. There's no read or progression, only execution. It is a passing play with the heart of a run, and like a run can help Seattle draw in cover and open things down field.

This is not a very popular play in the pros, but a personal favorite of mine and a chance to involve Deion Branch's quickness. The Patriots run something like this with Wes Welker. The key to it working is the interior line pulling forward without getting tied up. The I-backs rush forward to retard the freed pass rushers and the tackles and tight end John Carlson slow the edge rush. 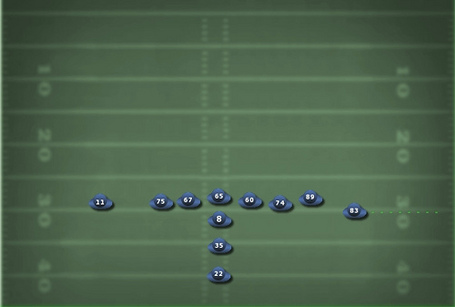 Deion Branch starts by running a loose "out". That gives the linemen a chance to disengage. Then Branch streaks back underneath. Matt Hasselbeck is retreating from imminent contact and waiting for his receiver to slice underneath. The second Branch begins approaching the right guard, Hasselbeck zips it towards the center and allows Branch to run into the pass. 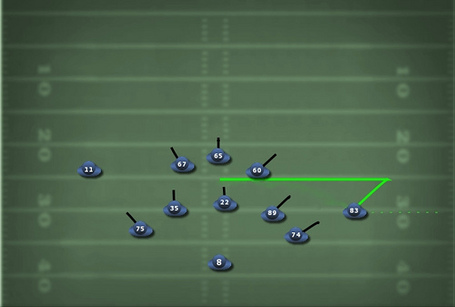 From there it's all about a split-second read, react and run. Branch can turn up field behind his blockers, but more likely, Branch continues his path left and attempts to race towards the left flat. It's a big play disguised as a little play. Branch has running room. The blockers won't last, but their purpose is to give Branch a floating pocket to attack the second level from. Let's hope that pterodactyl tendon holds.