That drive was another pin in the Seahawks hopes. Seattle barely budged the ball before Jon Ryan and Seattle's coverage unit combined to undo the Seahawks field position advantage. The resulting drive would sap what was left of Seattle's comeback chances.

Marion Barber scurried for six and Tony Romo converted the first on a pass to Martellus Bennett. Seattle, for its part, put a lick on Bennett: Aaron Curry standing him up and Jordan Babineaux delivering the blow.

Then, for a brief shining moment, Darryl Tapp nearly undid a half's worth of damage and put Seattle back in the lead. It was another moment where Seattle missed by inches. Tapp rushed around left end and forced back Flozell Adams enough to block out Romo's preferred throwing lane. Tapp jumped as Romo motioned and Romo tucked before taking another attempt. The ball sailed behind intended receiver Roy Williams, but where a good break nets a pick six, Josh Wilson skidded and the pass proved too errant. Ironically, an accurate pass results in a pick six.

Then the wheels came off. Seattle was attacking and Romo forced consecutive offside penalties to convert the first. Penalties would decide this drive.

Lawrence Jackson moved into right defensive tackle alongside Tapp, and stopped the next two plays near single-handedly. He tackled Barber after two and read and reacted to a draw and curled in to stop Barber for a loss of one. Jackson has looked every bit the end I wanted him to be: aware, active, athletic and everywhere.

From the official NFL rule book:

Actions that constitute defensive pass interference include but are not limited to:

(e) Cutting off the path of a receiver by making contact with him without playing the ball.

This play pissed off a lot of Seahawks, but the ruling was justifiable if not maybe right. Marcus Trufant was attempting to curl underneath Miles Austin's deep route. Jordan Babineaux was to play over top, though he clearly wasn't deep enough and would have been beat on a clean throw attempt. Trufant curled into Austin's route. The contact looked incidental, with Trufant clearly not attempting to cut off the path of Austin, but he did cut off the path of Austin and Dallas got the call. So it goes.

In the same play, but of less interest, Nick Reed dropped into cover and was literally stride-for-stride with Patrick Crayton. That a player - and damn Crayton is slow.

Seattle cued up a Marshall seven-man blitz and forced an incomplete.

Seattle sent Josh Wilson on its next blitz and Deon Grant hit Crayton to force an incomplete.

Third and 9: Miles Austin for 16. This was a failure of pass rush. The blitz design was..not so good. One could see it working, but there was one major flaw inherent in its design. Perhaps this graphic can illuminate what I mean. For sake of clarity, I'll only show the key players. 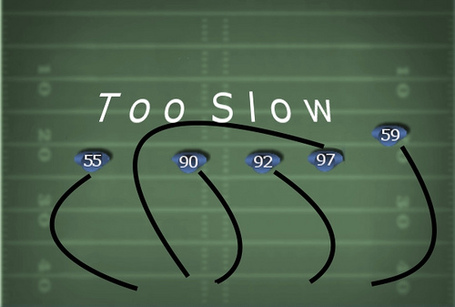 You'll have to excuse me if that's too subtle, for I am a humble caveman confused and frightened by your modern world. It's a perfectly cromulent blitz design and swinging Patrick Kerney across the line should give him a strong matchup against the left guard, but Kerney is far too slow to get into the action before Romo finds an open receiver. This will rile some feathers, but do not be surprised if Seattle drafts a defensive end in the first round of next year's draft.

Cory Redding and David Hawthorne combined to delay the inevitable. Redding created the pressure and Hawthorne hit the ball out of Jason Witten's hands. A play later Roy Williams palmed the ball into the end zone and the Seahawks fell behind by two scores to end the half.

Seattle got the ball back and ran a simple run to kill the clock. The fun was over. The third quarter awaited.