The Seattle Seahawks have franchised Leroy Hill. The tag costs Seattle 8.3 million, but is really just a precursor to a long-term deal. The move gives Seattle leverage in negotiations and will eventually save Seattle money. How much Seattle eventually pays Leroy Hill and especially how Seattle plays Hill will determine if franchising Hill is the right move or the wrong move.

Your opinion of this decision probably turns on two factors: how much Seattle actually signs Hill for, and your opinion of the linebacker position. If you think the thumping bullies behind the line are building block players and not easily replaced, then locking up one that is young and productive seems natural. If, instead, you think of linebacker somewhat like the defensive equivalent of the running back, highly dependent on the play of the line, overvalued for its contributions against the run and undervalued for its contributions against the pass, and reasonably fungible, then this move might seem a bit alarming.

I think Hill is a talented young player, but I also think Seattle could have satisfactorily replaced him with the talent they have. If Seattle uses Hill more as a pass rusher, like they did in 2005, his value skyrockets. He's not DeMarcus Ware, but he's not as far off as people think. The greatest thing that separates the two is opportunity. Hill has exceptional ability to move through traffic, is a fierce tackler and has the kind of closing burst that turns pressure into sacks and sacks into forced fumbles. As a Tampa 2 style linebacker, Hill is sub par, a good run defender, but bad enough in coverage to offset it, but as a zone blitz style linebacker, one who defends the run, plays some zone, but is regularly sent on blitzes, Hill could be a beast.

This contract turns on that decision. Seattle has signed an impressive set of defensive minds. Coaches from many schools that are rebuilding the defense from the playbook up. The last two seasons Seattle has become complacent, overly reliant on Julian Peterson as a pass rusher, and, especially in 2008, fixed to vanilla pressure packages and full-house style blitzes at exactly the wrong time. So it's up to Jim Mora, Gus Bradely and Seattle's defensive brain trust to make me believe in this contract. Unleash Hill... 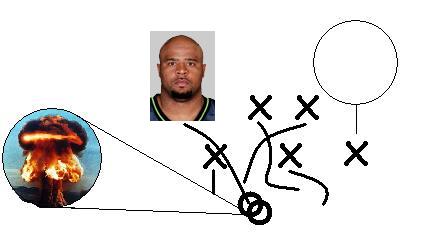 And you'll have a happy fan.