Share All sharing options for: BJ Raji Has Short Arms (And Other Facts from the NFL Combine)

The 2009 NFL Combine is over and debate the results as much as you like, they do provide a good foundation for a player's athletic profile. Yes, tenths of seconds matter. Tenths of a second matter because the level of competition is just that high. Consider that Usain Bolt scorched his competition at the 2008 Beijing Olympics, setting a world record in the 100 meter. It was a laugher. The final ten meters looked like this: 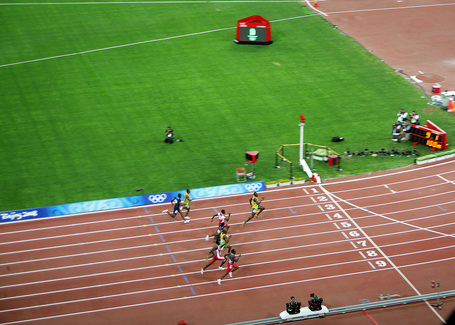 Bolt beat silver medalist Richard Thompson by just 2 tenths of a second. An athlete is not a football player, but, as a measure of athleticism, the NFL Combine provides important information. Because if being a great football player was enough, Mike Hass would be dominating the league as a Bear rather than struggling for a roster spot with the Seahawks.

If you've paid any attention, you know the top performers in the forty. Here's some less reported stats that piqued my interest.

And with that, I say goodnight to the NFL Combine and hello to actual scouting.