Share All sharing options for: The Tape: Colin Cole Hammered by Atlanta, Part 1

I should be in bed, but I've got the cold chills from workahol withdrawal so onward. So that everyone can get a good look at Seattle's new run stopping force at the one, I fetched some tape from week 5 of the NFL season. Green Bay faced Atlanta at home. I picked this contest for a few reasons. Colin Cole had four tackles, all solo, a season high. He matched quite a bit against a lineman I know very well, Justin Blalock. At this point in his career, Blalock is a shade above average though very powerful. And the Packers faced 36 rushing plays, giving me ample opportunity to see Cole in his element.

Cole first subs in on the sixth play of the Falcons first drive. He is doubled by Blalock and center Todd McClure,

before working his way back into the play and holding the line as Turner converts the first after a gain of three.

Cole stays in for the next snap. He is initially turned out and away from the hole by a single block by McClure, but sheds McClure completely and fights his way back, tackling Turner after a gain of four.

Next snap, Jerious Norwood substitutes for Turner. Cole and right defensive end Mike Montgomery attempt something that looks vaguely like a stunt, allow a good sized cutback lane right and scrum ineffectually as Norwood runs for 5 on 2nd and 6. Green Bay is now on the one.

Goal line. Cole gets low and the Packers line holds the point against a Turner dive.

Goal line. Cole penetrates left, but the Falcons are running a bootleg right. Ryan rolls out and finds Justin Peelle for the score.

Cole starts the next drive at left defensive tackle. Harvey Dahl and Tyson Clabo double Cole off the snap resulting in a gaping hole right. 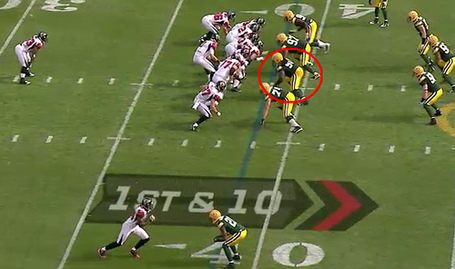 Aaron Kampman, unblocked, overpursues attempting to seal the outside and Turner simply runs forward and away from him. Cole is so completely overmatched by Dahl alone that Clabo peels off and screens AJ Hawk from the play. 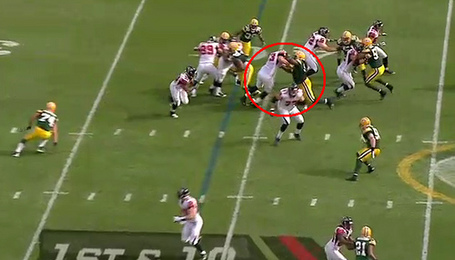 Charles Woodson finally tackles Turner after a gain of 22.

Looks like family matters are going to force me to stop there, but, I gotta ask, we lovin' this guy yet?