I wish I could start this:

Patrick Chung is a maverick. A lone gun among outlaws. Desperately trying to wrangle the broken coverages, missed assignments and bad angles of his teammates. Don't be fooled by Oregon's 111th ranked pass defense, Chung was exceptional among the awful; A pro among fringe college talent.

But it isn't so. Chung was one of the outlaws, certainly the most talented, but raw, sometimes sloppy and the kind of maverick that gets picked off by wolves. Ok, that last line is mostly for rhetorical effect. Chung was picked on a bit. Before Dez Bryant went down late in the second quarter, every Oregon DB was picked on. College football has those kind of talent mismatches, where one player truly can take over a game, and when Bryant went down, Oregon went from totally overmatched to right back in it.

Which brings us back to Chung. Offensive talent can take over a game. A defensive back cannot. The best defensive back that ever lived can still be thrown away from. So, it is true that we shouldn't blame Chung for Oregon's 111th ranked pass defense, but, truthfully, I didn't see him play well above it either. Zac Robinson wasn't throwing away from Chung. He was throwing at Chung.

We left off with Chung delivering a smack after a 15 yard Brandon Pettigrew reception. Let's skip a couple plays forward.

Third and Six. Robinson targets Bryant on a swing pass. Chung flies from the third level, tackles Bryant in space, but falls off, wrapping only Bryant's ankles and allowing Bryant to fall forward for two more. Bryant records 9 and the first.

Chung plays nickel on the next play. If you want a definition of what a "Rover" is, it might be "situational defensive back" and for Chung "strong safety, free safety, nickelback". Without Chung playing over top, Bryant finds single cover and receives for an easy touchdown.

Chung does not contribute on the next play, but does have a bit part in this tragedy.

Oklahoma runs play action. Robinson rolls out. Chung is playing centerfield and bites underneath. Bo Bowling comes completely free to the end zone. Robinson shows his college and instead locks onto Bryant, still easily carving the bunched up and disorganized Ducks defense, but missing out on an easy score. Not entirely sure who screwed up coverage, but signs point to Chung. Chung was playing over Bowling to start the play, and Chung looks way out of position at its end.

Chung plays a good center field on the next play, but Robinson still finds Bowling for 27.

Again jumping a couple plays ahead, Chung vacates outside containment on a left option pitch. Instead biting on Robinson and allowing Hunter to take the lob for an easy six. Chung has no help, and there's something to be said for the inherent difficulty in covering two players three yards from the end zone, but Chung does make the wrong read.

One play later, Chung is roasted by Bryant and attempting to catch up, blatantly interferes and nullifies a TJ Ward interception. He doesn't tackle Bryant, but he does screen him while making no play for the ball.

Chung is a bit player for the rest of the drive, or, at least, off screen.

Next drive, Chung breaks containment on Robinson and then cleans up his own mistake: tackling Robinson after seven.

The next play is probably the most instructive of the first half, so we'll break it down in detail.

3rd and 11 on the Oregon 48. Super high leverage situation. Oklahoma State breaks in a 3 WR left, 1 WR right, single back, shotgun formation. Oregon is in a 4-2 nickel. 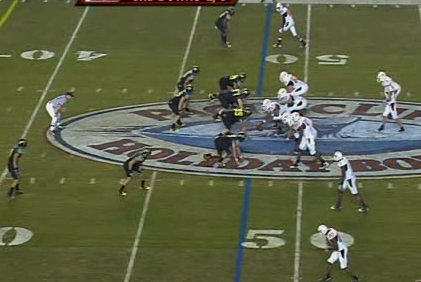 Bryant is playing slot. Oregon is running a cover 1, with man cover by the corners (and a healthy cushion by the right corner), the weakside linebacker and nickelback covering the flats, and bracket coverage on Bryant. The brackets are Chung over top, strongside linebacker Spencer Paysinger underneath. Bryant runs a slightly angled route in, straightens like he might take it deep and then drags right just before the first down marker. 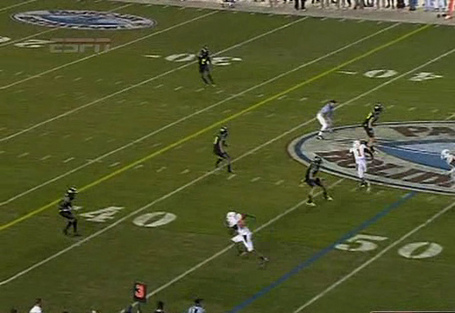 Chung positions himself offensive left, biting on the quick up and out move by Bryant. Robinson roles right, draws down Paysinger, breaking the bracket coverage, and then delivers a strike to Bryant. 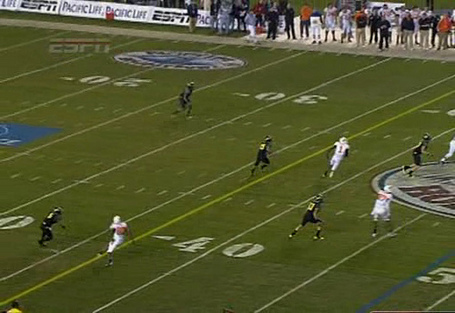 Chung is now trailing, Bryant is a yard away from the first and continues right. 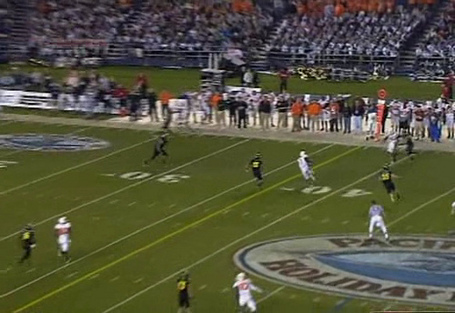 Chung takes a good angle of pursuit and closes the distance between him and Bryant. Bryant gets to the flat and attempts to take the ball up field. 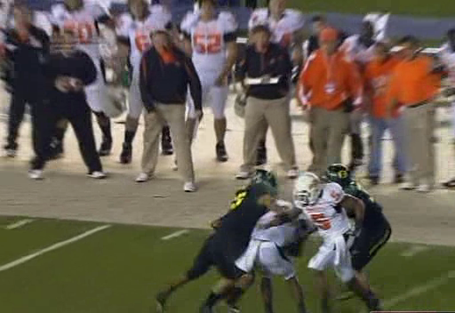 He's met by Chung, but gains 15 and converts the first.

So: Chung misreads the route, but not too badly; the coverage scheme is badly exploited by Bryant's route; Paysinger bites underneath, dropping bracket coverage; Chung takes a good angle of pursuit, flashes good catch up speed and limits the damage.

We next see Chung blitzing off the edge on the first play of the Cowboys first drive of the second quarter. It's a nickel blitz and Chung shows the kind of tools and versatility that make defensive coordinators drool. He's also blocked out with ease by top pro prospect, left tackle Russell Okung. No shame there.

Bryant is injured not long after and the complexion of the game is changed.