Share All sharing options for: The Tape: Mr Hustle Meets the Bears, pt 1

Cory Redding is a team leader. That makes him, by my count, Seattle's fifth team leader on defense alone. Six if you count Colin Cole. That's a lot of cooks. If the team tanks again in 2009, will everyone tell everyone to keep their head up, stay unselfish and stay competitive? Will there be factionalism? Shouldn't someone be talented and raw, coachable, a listener, someone who follows? I can't be the only one suffering daily terror comprehending Seattle's "West Coast Defense".

He's also a lot of fun to watch. Detroit aligned Redding on both the right and left, but played him almost exclusively over the "B" gap in the "3" tech. I'm not wild about jargon. Basically, Redding's job is to run through the space between the guard and tackle and into the backfield.

Redding starts on the left. He shows a quick first step and a good hand punch, but does not factor in a short pass for 8.

Redding cuts into the hole, but Matt Forte powers through an arm tackle. Forte runs for five and the first. Redding tackles.

Redding shifts right. At the snap, he disengages, stunts into hole but misses on the tackle.

Right. Redding disengages, runs down pile, but does not factor.

Left. Redding is quick off the snap, forces double team, but is neutralized.

Redding is subbed out.

Eighth play of the drive. Redding on the right. Detroit zone blitzes out of a nickel package. The Lions overload the left, or offensive right side. Right defensive end Dewayne White drops into coverage. Redding runs a modified edge rush, effectively isolating left tackle John St. Clair. Forte slides over for a support block, but a support block isn't necessary, and Redding factors only as a decoy. Left end Jared DeVries sacks Kyle Orton for a loss of six.

Redding is subbed out the next three plays.

Redding aligns on the left. He's a little slow of the snap, but forces a double team. Orton passes incomplete on 3rd and 6.

Right. Pushed out and away from play. Kevin Jones runs for three.

Next play (The Goods) 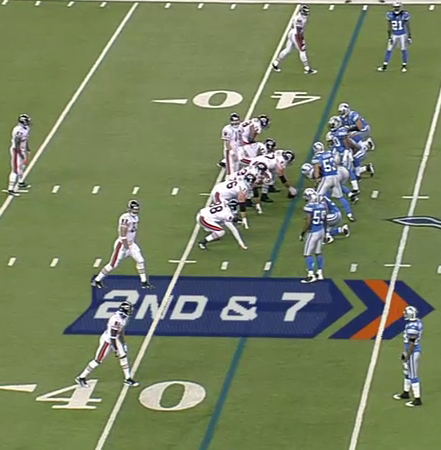 Orton stands, calls out the blitz, but does not audible (formation). The Lions walk back their linebackers. Redding slides inside slightly, moving over the 1 gap. 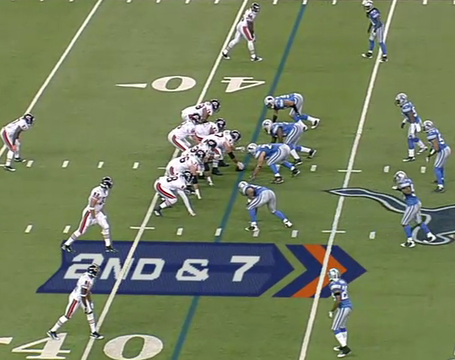 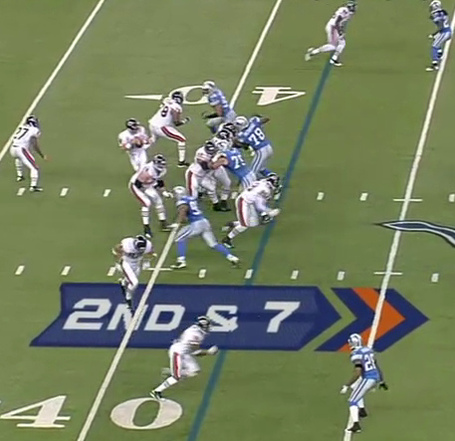 Orton makes a quick read and dishes left to Jones. Given the unbalanced formation and brief read, this is a designed play.

Jones has space in the flat. 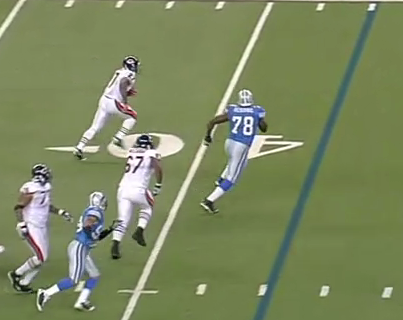 Redding isn't credited with the tackle, but his bruises are all over it. 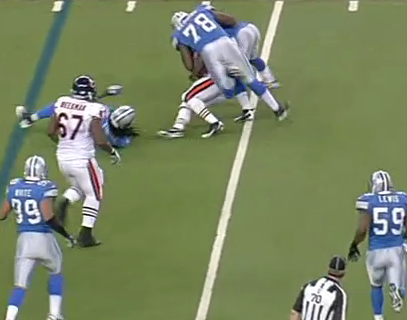 Next play. Redding slides left, but stays over the 1 gap. Redding sidesteps and shoots the 3 gap, flashing excellent quickness. The pass goes for 8 and the first. 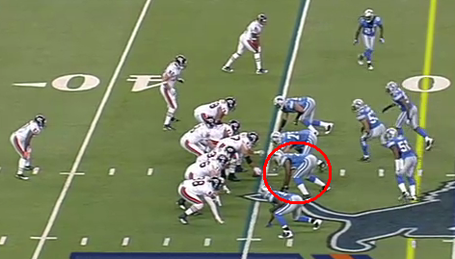 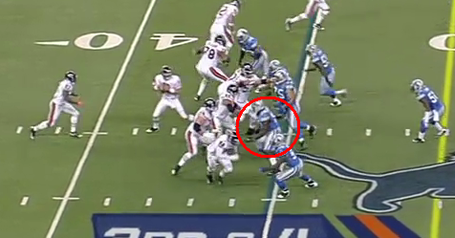 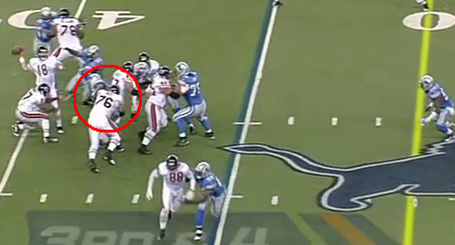