What Went Wrong: Weaver has now missed 18 games in the last three seasons. He was legitimately IRed in 2006 with a high ankle sprain suffered in the preseason that wasn't fully healed until week 11. His injuries in 2008 are less concerning. His run blocking never developed. He's a hat-on-man blocker at a position where bludgeoning force is required. His pass blocking was overall quite good, but still inconsistent. He could bury a guy or miss him entirely.

What Went Right: Weaver's rushing and receiving awesomeness is spoken of with too many buts and qualifiers. Weaver is a good runner for a fullback, a good runner that can help a team that gives him the rock. Weaver is a great receiver. He has hands, moves, an ability to separate, runs good routes, finds soft spots in the zone, is reliable, no quit and versatile. It stings to see Weaver go. He was more than just fun, he was good, he was unheralded, he was valuable, someone fans could brag about to non-fans, he was a throwback to the days a guy could work his way up within an organization and become a fixture and fan favorite, and now he's an Eagle. At least he got paid.

(Posted after the jump)

Outlook: Seattle is flirting with Justin Griffith, and he's stable and knows the offense. Yawn. I want me some Owen Schmitt.

Fifth play of Seattle's second drive of the fourth quarter. 2nd and 5, Chicago 16. Seattle breaks 3 WR, Split Backs. Bears in a base 4-3. At the snap, Floyd Womack, who had a very solid half, blocks in engaging Matt Toeaina. That frees Pat Murray to pull left. Ben Claxton pulls up and patiently sits between Rod Wilson and the offensive left, engaging Wilson when Wilson begins rushing towards Forsett. With Womack attacking in, Murray pulling out left and Claxton attacking the middle of the second level, defensive end Ervin Baldwin is unblocked until -- a screaming comes across the sky. Schmitt staggers Baldwin, jogs him downfield and picks Craig Steltz. Steltz, forced to flatten his pursuit angle and engage Forsett horizontally, compensates by facemasking Forsett.

If that were it, that'd be sweet, but that's not it, no that's not half of it.

Overtime, fourth play of Seattle's first drive. 1st and 10, Chicago 36. Seattle breaks 2 WR, TE, SB. Bears in a base 4-3. Seattle is running a sweep play left, with both guards, left guard Murray and right guard Mansfield Wrotto, pulling. At the snap, Schmitt again attacks the right defensive end, but this time strikes with such force that he levels both end Nick Osborn and tackle Toeaina. That pileup picks all three linebackers and Forsett sweeps untouched into the second level. 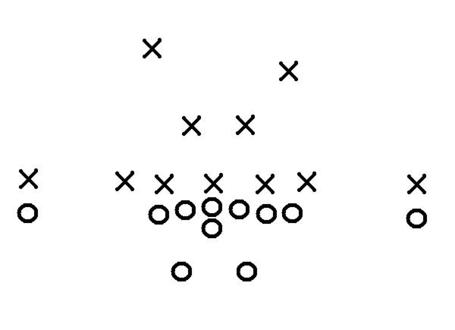 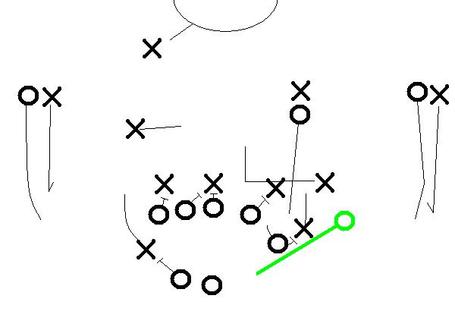 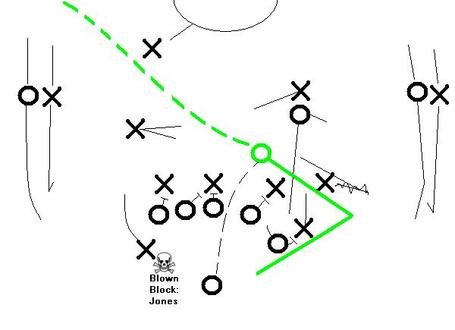 Jones is run over by Lawson in an uncharacteristic blown block. Wallace, sensing pressure, finds his outlet receiver: Leonard Weaver. Weaver plants, explodes out of his cut and leaves Willis chasing air. Weaver rips past Michael Lewis and Takeo Spikes, and behind the excellent block of Koren Robinson for the score. All to the tune of the wonderfully canned, sublimely inappropriate play-by-play of Ron Pitts: "Second and twelve Seattle. Throw inside. Weaver with the green shoes. And look at those green shoes go! Is it Halloween? No. It's touchdown Seattle."