The Tape: Nine Percent of Not Sucking

Share All sharing options for: The Tape: Nine Percent of Not Sucking

At the end of the first quarter Atlanta was up 21 - 0. The Falcons had scored on each of their first three drives and in dominating fashion, averaging 72 yards per drive and an NFL Blitz like 16.6 yards per play. Detroit's defense looked disabled and overmatched. Like a juco matching against the `92 Cowboys. But Cory Redding had not made a single false read, taken a false step, been overmatched, or even disappeared. In a style soon to win the hearts of Seahawks fans, Redding was everywhere. Getting good push, slicing into the backfield, chasing plays into the flats, and recording a quarterback hit on Matt Ryan's first professional pass. That pass went for 62 yards and a touchdown.

For better or worse, football is a team sport.

Chuck Darby started at nose tackle. I wrote about Julian Peterson playing strongside and LeRoy Hill playing weakside, and found myself stuck in the morass of NFL jargon. Seattle doesn't list a strongside and weakside linebacker, only outside linebackers. Likewise, Atlanta lists two defensive tackles without other distinction. Detroit lists a nose tackle and an under tackle. It has a strongside and weakside linebacker. Rod Marinelli is a former defensive line coach, so that probably accounts for the specificity. The important point about Hill replacing Peterson was not the particular terminology, but the job function. Hill has the goods to blitz and man cover (sort of), and he's actually a net upgrade over Peterson in run support. He's a better tackler than Peterson, more secure, better in space, and more punishing. Hill is also a better assist run stuffer. He's stouter against tight end blocks, better able to ram the fullback back into the hole, more disciplined about his assignments and containment; and likely, because of all this, to positively impact Lofa Tatupu, Seattle's defensive line and whoever it is that plays strong safety. Patrick Chung, Michael Hamlin, Deon Grant etc. need someone to channel the rusher and set up the big pop.

Chuck Darby started at nose tackle. That should have given Detroit fans fits before their team's first snap. I can't stand the constant recycling of talent done league-over. Darby has made the rounds, never fully losing that whiff of winner he was anointed in Tampa Bay and Seattle. I never watched Darby much when he was in his prime, but over the past three years I've seen few players so singularly bad at their jobs. Tampa 2 derived systems define Darby as the hybrid, disruptive nose tackle. The Tank Johnson or Booger McFarland-type that (sort of) shields the linebackers and (sort of) gets after the ball carrier. In that capacity he is neither real disruptive nor at all capable of holding the point. He's sort of what Seattle signed in Colin Cole, plus four years.

Chuck Darby started at nose tackle and Redding at under tackle. Redding played left. He got good push on the first two plays, cutting into the hole on the second but not effectively closing the hole. Michael Turner ran for three and the first.

Redding switched to right on the next play, matching against our old friend Justin Blalock. By play's end, Matt Vasgersian was beside himself cheering Matt Ryan's first touchdown pass while Ryan himself was supine, beneath a pile of Cory Redding. The particulars are only interesting if you like masterful pass rush that never wastes a motion. 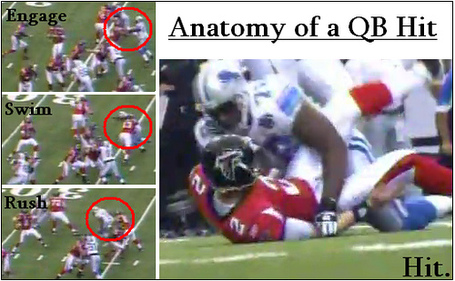 Redding switching to defensive end troubles me. Redding has decent speed off the snap, but not decent speed for a defensive end. He has a good mix of power, moves and quickness; he has above average agility for a tackle; in limited snaps seems adequate against the double team; is a three, or under, or single-gap tackle and exclusively that, but a good, even very good three or under or single-gap tackle. It's a position Seattle needs. Seattle doesn't need another defensive end, having four that have earned playing time and eleven picks to add another to the rotation.

The switch to a West Coast Defense - and we've had our fun - troubles me more. Something shouldn't be named before it matters. Seattle is making a lot of curious moves, and making them more curious on arrival. The Seahawks sign Colin Cole to starter money after Cole played an underwhelming reserve role throughout his prime years. Instead of making this unproven player prove it in camp, the team tells him he'll start. To accommodate the move, it moves that rarest of breed, the hybrid, disruptive nose tackle that works, to three tech. The team then trades its best linebacker and likely its best defensive talent for a very good three tech. Instead of undoing its prior mistake, creating a tackle pairing capable of havoc, a rotational pairing capable of lesser-havoc, it tells said very good defensive tackle to slim down, you're playing defensive end. A position he hasn't played in years and a position he has almost no record of success at.

What then is this West Coast Defense? My very early read is that Seattle is assembling a stable of versatile linemen. The goal to create a dynamic and adaptive rotation. A set of substitutions as run-oriented as Jackson-Cole-Mebane-Redding and as pass oriented as Tapp-Jackson-Mebane-Kerney. It's ambitious, and clean and simple enough to work. Neither formation is laughably weak against an out of type play. The former can create some minimal pass rush and the latter isn't suicidal against runs. I want to be excited, I do. I have to stop myself from being reactionary and fearful. But, Seattle is going to suffer some growing pains, and when this is done wrong, assuming it's done at all, it's not only going to malfunction, it's going to be a fantastic mess. And don't even get me started about its weakness against the hurry up...

I want to be someone that sees change coming and feels hope. So give it to me Seattle. Make this work. Make a football masterpiece, title first.