Regularly updated throughout the day.

"The meetings are easy. I could talk football all day...I know my defense and I know football." --Jenkins 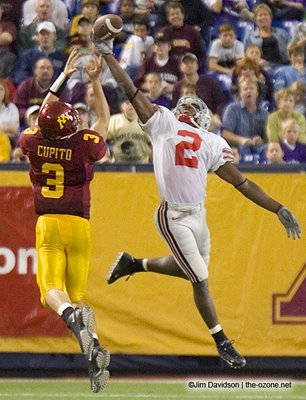 Tim Ruskell and James Mora have a shared philosophy: They want someone at four that contributes right away. Jenkins is an elite athlete. The kind that regularly stuns with his grace and body control. He's ridiculously smooth. He was the best corner prospect entering the combine and the best corner prospect exiting the combine - 40 time be damned. And no GM will care less about his 40 than Tim Ruskell. Ruskell cares about Thorpe Awards, All-Americas, college starts, college production and tape.

This pick assumes Seattle has given up on corner Kelly Jennings. Here might be why.

Ruskell knows when to cut bait. Before the 2008 season, Mike Holmgren announced an open competition for the second cornerback spot. It sounded like a stunt at the time, but, in retrospect, it may have been an admission that Jennings hadn't developed as they'd liked. Jennings, despite the slips and falls, is clearly a good, even very good cover corner. He proved so in 2007 and in far fewer snaps in 2008, Jennings again recorded 12 passes defended. That's a testament to his cover skills, but also an indication that teams stopped fearing him. Cover wasn't enough. Jennings failed to develop ball skills. Opponents knew they could pass at Jennings and the worst outcome was a pass defended. Jennings could rectify that. Add enough enough in the way of interception threat to keep his cover imposing. And if Seattle were in another spot, without a shot at the top overall corner prospect, it might lean on its impressive depth at the position, but, in this scenario, there is sufficient evidence that Jennings will not develop and a rare enough opportunity to add elite talent at the position that Seattle drafts Jenkins.

Seattle sees Josh Wilson at nickel. I'm fine with that. Jenkins would step in at the right cornerback spot, matched primarily against possession receivers, where his speed wouldn't matter as much, and where, should his speed not rate, he could stay as. More likely, Seattle would slowly transition Jenkins as Trufant ages, and as Trufant slips from top corner to steady corner, Jenkins will step into his own.

Chung had exactly the combine he needed. He didn't blow anyone away and he didn't rocket into the first round, but he did put speed concerns behind him and he did show the kind of raw power to prove his fearsome tackling will translate into the pros. Seattle is interested in adding a strong safety. Jermaine Phillips presents a good model for the skills they're interested in: very active, strong against the run, and good, not great cover skills. That's Chung to a tee. Plus, he's got this going for him. 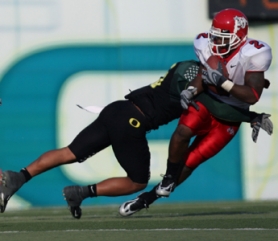 Chung would be a huge addition to the run defense. Seattle has long needed a rover type that can cut off long runs and provide backside containment. Adding Chung would also be a huge addition to the pass defense. Current strong safety Deon Grant plays an exceptional deep zone. Seattle has squandered that skill. Drafting a competent strong safety moves Grant back to free safety. Brian Russell to Deon Grant is an exciting net improvement. Something like bottom five at position to top ten. That's the kind of move that maximizes existing talent and allows a bottom feeder defense to again dominate.

Count me among the few that think Seattle will upgrade at running back. Seattle's lightning, Julius Jones, didn't see the field too often and maybe it was favoritism or a character conflict with Mike Holmgren, or maybe Maurice Morris outplayed him. Whatever the case, Greg Knapp runs a two back system. Seattle needs two healthy starting-caliber running backs every game. Seattle could add another thunder, but I think it's more likely they attempt to upgrade their lightning.

Peerman is extremely talented. He's a studious guy and very religious. In fact, he's a ordained minister. He played in 41 games at Virginia. As a running back, Peerman is fast, elusive, powerful and, well, sometimes a highlight reel betters adjectives.

The knocks on Peerman are injuries and hand size. Both might be a little trumped up. Peerman suffered a Linsfranc injury in 2007. Lisfranc injuries can threaten a career depending on the severity, but given his production his senior season and his strong showing at the combine, that's probably not the case with Peerman.

Peerman's hands are just 7 7/8". Scouts are worried he will have fumble problems in the NFL. Peerman fumbled at the Senior Bowl and fumbled away a win against Miami last November. That fumble was his first lost fumble of his career. Fumbles happen so infrequently, I sometimes wonder if it's a meaningful stat. The sample size is tiny and the difference between a fumble and a tackle often a matter of fractions of a second. Which is to say, I'm just not too concerned about Peerman's fumble problems, and if that's what forces his stock into the second day, well awesome.

Seattle needs a starting capable offensive guard. He should be agile, quick, powerful, capable of working in a zone scheme, preferably from a major conference (SEC even better), coachable and productive. He doesn't have to be tall.

Tyronne Green is only 6'2" - with cleats on. Like Mansfield Wrotto, he's a bit raw. And like Wrotto, Green entered college as a defensive tackle. He didn't convert to guard until 2005. Scouts rave about his athleticism. He has 33 ¾" arms and 10 ¼" hands. Green busted his butt for coaches at the Senior Bowl and NFL Combine, is agile, quick, powerful, capable of working in a zone scheme, a starter at Auburn, and even has some non-competitive experience at center.

Painter has the arm strength and quick release, but his production over four seasons leaves something to be desired. Painter probably desired some kind of talent on his offensive line and a receiver worth throwing to. He's pure developmental prospect. All potential and little production at this point, but with their (presumed) faith in Matt Hasselbeck's health and in a draft without too many quarterbacks worth taking, Painter could be the latest Charlie Frye. The new David Greene. But bigger, stronger, with more potential and still not past due expiration date.

Might not fall this far. Strictly a kick and punt returner. Tenth ranked punt return average in college football in 2008.