The Tape: Colin Cole Makes Me Want to get Hammered, Part 3

Share All sharing options for: The Tape: Colin Cole Makes Me Want to get Hammered, Part 3

Colin Cole saw nine snaps in the second half. It was more of the same. Cole was competent against single blocks and completely overmatched against double blocks. On this play

Cole was pushed three yards off the line.

And that's a conservative estimate. 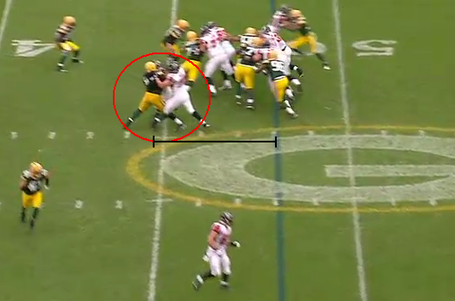 Cole is competent against single blocks, but he is by no means effective. Cole may tussle with the blocker, get under his pads, contort him right and left and eventually shed the blocker, but he has no follow up. He's far too slow to rush the passer (and getting slower). He'll rarely shed fast enough to redirect a run. And he doesn't make a ton of productive tackles himself. Of his 126 career tackles, just ten are for a loss. Brandon Mebane has nine in 68 tackles. Rocky Bernard has 44 in 281.

Cole wasn't signed to dance with single blockers. He was signed to stand up to the double team and keep blockers out of the second level. I see no evidence that he will. The best Seattle can hope for is that Mebane becomes such a beast at the three that teams must regularly double him. In this scenario, Mebane keeps Cole looking good, Cole shows something facing single blocks he's never shown facing double blocks, Tim Ruskell looks smart and Cole looks the late bloomer. It's possible.

I have serious doubts. Mebane made a great one tech. For him to be a great three tech, he's going to need someone to keep blockers off him. Because if he's regularly doubled at three, and that's a rare phenomenon, even then talent is squandered. A beastly Mebane deserves a partner that can keep the heat off him. A Pat Williams to his Kevin Williams. I see no reason to think that's Cole, and I see no reason to think this signing was anything but a mistake. Teams will run at Cole and Mebane can't stop that. Making Cole either liability or handicap. Without seeing him take a single snap in Blue, I'd accept dead money to shed this dead weight.