The Oregon Ducks ranked 82nd in total defense and 111th in passing defense, allowing 389.6 and 270.2 yards per game, respectively. That is inflated by pace. Oregon ranked 40th in adjusted defensive FEI and 39th in unadjusted defensive FEI. Oregon was scoring in bunches -- and fast. Meaning opponents had plenty of drives to amass yards.

The Ducks were not a good defense in the first quarter of the Holliday Bowl. The pass rush was null and the secondary looked disorganized and unaware. That puts a burden on Patrick Chung and makes scouting him rather tough. Chung is Oregon's factotum. He plays nickel, plays center field, plays in the box, contains against stretch options and is generally wherever the staff thinks the play will be. All that roving must leave a man dizzy.

Here's a look at the good, bad and inexplicable from Chung.

(11:52) Kendall Hunter takes an option pitch from Zac Robinson. TJ Ward strips beastly Dez Bryant and corrals but does not stop Hunter. Chung charges from the third level, delivers a hard tackle that nearly forces a fumble. Hunter stopped after a gain of five.

Quick Read: Chung is a very good downhill tackler and knows when to fight his way into the action. He relies a little too much on his pop and gets a bit messy with his wrap. Nice support tackle.

(8:46) Oklahoma State is pinned at its one. The Cowboys run a play action boot right. Chung is matched tight to Bryant, but Bradon Pettigrew slips directly underneath. Chung immediately breaks off coverage with Bryant and delivers a hard support tackle on Pettigrew. The monster tight end is stopped immediately.

Quick Read: Another nice instinct play. Chung has good cover on Bryant, but when Pettigrew receives just underneath Bryant, Chung breaks on the pass and delivers a solid tackle.

(7:26) Robinson pitches to Keith Toston. The option sucks up Oregon's defense, leaving Tolston with one to beat to the corner and to the end zone. That one is Patrick Chung. Chung flies down, but doesn't properly square, burying a shoulder in Tolston but not wrapping. The hit jars Tolston but he stays on his feet, stumbling for an additional eight.

Quick Read: Spencer Paysinger cleans up. Bit of the good, bit of the bad here. Chung gets a body on Toston and disrupts an otherwise drive ending play, but a squared hit ends the play before the first. 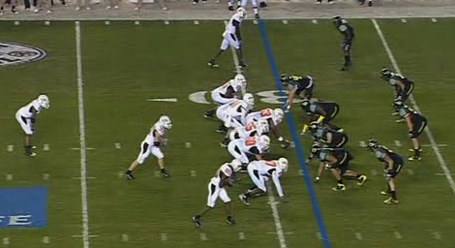 Chung lays the wood. Pettigrew holds on for 15.

Quick Read: The 263 pound Pettigrew holds on, but most pros don't. Not much can be done against a deftly carved zone, but Chung shows his cover 2 chops by immediately breaking on the pass, cutting off the route and delivering a man-stopper thump against one of the biggest, most physical and most talented tight ends in college football.