Leonard Weaver was not invited to the 2005 NFL Combine. He signed with Seattle as an undrafted free agent. A combination of luck, hard work and fit earned him a spot on Seattle's roster. Four years later, he once again finds himself unwanted by the NFL.

He doesn't fit what new offensive coordinator Greg Knapp wants in a fullback. We can talk about adjusting scheme to talent, but that has limitations. Weaver is a converted tight end and he lead blocks like one. The method of Knapp's offense is to run the ball on 50%+ of all downs, and on nearly two thirds of those runs to run from a two back set. If we use a 1,000 play baseline, and assume that the second back in most two back sets is a fullback, then Seattle's fullback will play in about 300 snaps as a lead blocker. In 2007, Oakland ran the ball in 508 of 1000 total offensive attempts. Fullback Justin Griffith played in all 16 games. That season, Oakland ran from two backs sets on 63% of all runs (PFP 2008). Griffith had just seven rushing attempts. Weaver had 30 in 2008 and 33 in 2007.

Knapp needs a fullback that blocks first, runs and receives a distant second. That's not Leonard Weaver. Then, why not make Weaver something other than a fullback?

Seattle has its fullback in Owen Schmitt. Schmitt played in a spread option in college, so his traditional fullback skills are a little underdeveloped. The kid knows how to move and block and deliver a blow on the move. At some point, Seattle needs to throw him into the fire and see if he survives. Seattle needs a fallback fullback should Schmitt not take to the finer elements of the position - specifically pass blocking. There may not be a better pass blocking back than Weaver.

Weaver is also a valuable rusher and an exceptional receiver. He has contributed more receiving DYAR the past two seasons than Nate Burleson, DJ Hackett or Deion Branch. It might seem unfair to compare the sick to the well until you realize that Burleson, Hackett and Branch are wide receivers. Weaver has soft hands, good body control, a rare ability to cut up field after the catch and a fullback's mentality to yards after contact. He brings that mentality to his bruising inside running style. He has averaged 4.5 yards per rush, and despite being the saddle on Mike Holmgren's hobbyhorse fullback draw, has contributed 39 DYAR rushing the past two seasons.

Seattle will have plenty of touches to go around. Knapp will want to run five to six hundred times in 2009. That could split 250 for Julius Jones, 150 for TJ Duckett and still leave 100 to split between Weaver and Schmitt. Say, 85-15. That's a conservative estimate. It still nearly triples Duckett's touches,  and would be the second most of his career.  Jones' career high is 267 in 2006; he had 257 in 2005. Seattle goes on a roll, racks up a winning record, smothering opponents with the third quarter long drive, and their rush attempts could jump to 550 or even 600. That could be split however, probably towards more touches for Jones, the nominal starting running back, but however, it's an equitable split that keeps everyone involved and everyone fresh. Schmitt becomes the fullback. Weaver just another running back.

The problem is Seattle and the league sees Weaver as a fullback and barely that. Fullbacks do not rush 100 times a year. They block. They get their cleats muddy and their facemasks bent. They struggle for short yardage and push the pile. Fullbacks embody three yards and a cloud of dust. Yeah, except... 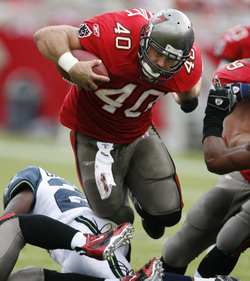 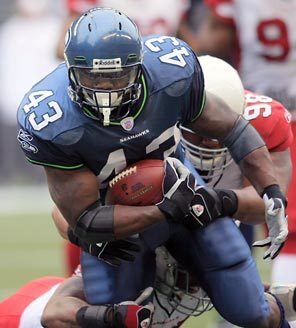 Minus the grit and savvy.

Tim Ruskell should know talent comes in many bodies. In comes in too short defensive tackles that manhandle prototypical guards. It comes in too slow tight ends that run routes sculpted by Donatello. And it comes in miscast fullbacks that do everything well but lead block. Letting Leonard Weaver walk is losing talent for the sake of rigidness. It's losing talent for the sake of narrow roles, football dogma and a damning reverence for the title "fullback".