Share All sharing options for: Is Brian Orakpo or Everette Brown Already Better than Lawrence Jackson and Darryl Tapp?

If Seattle selects Brian Orakpo at four, he will be the first defensive end taken in the 2008 draft. I'm dreading that possibility. It's significant that Orakpo is the first defensive end taken, because it gives us a rough idea of his development. Talent is lot more fluid than it looks on a draft board, but teams have enjoyed a reasonable amount of success evaluating the best player at an individual position. The first two defensive ends drafted average five sacks per season, a sack a season more than the defensive ends drafted third and fourth. That means Orakpo could be expected to be about one sack per season better than Lawrence Jackson, who was the third defensive end selected in 2008 draft. What I want to know is how much does Jackson's and Darryl Tapp's advantage in experience put them ahead of Orakpo, and when will Orakpo's potential overtake their experience? In other words, if Seattle is drafting Orakpo thinking it should try to "win now", is it in fact putting itself behind?

Data is from the 1982 season to the 2004 season. 1982 is the year the NFL officially started tracking sacks. The data encompasses 138 players over 23 seasons. 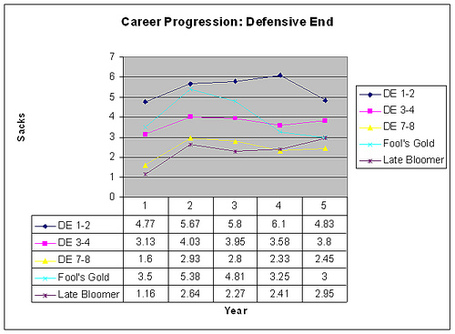 The answer is no. The first two defensive ends selected in a draft outperform the second two defensive ends selected in a draft throughout their respective careers. The former outperform the latter in their rookie season, and that rookie season outperforms the latter in each of the four following seasons. The data titled "Fool's Gold" is the set of player's selected with the seventh or eight pick that outperformed their group's average each of their first two seasons. Darryl Tapp belongs to this group. That's only eight players, but it's at least interesting to ponder if Tapp's best seasons are already behind him. The data titled "Late Bloomers" is 28 players that underperformed their group's average in their first season. Jackson belongs to this group. Though, on the whole, they continue to underperform the larger group, they do eventually show improvement. After five seasons, the Fool's Gold group and Late Bloomers group settle in at three sacks a season.

Sacks are just a proxy for a defensive end's total contributions, his disruptiveness. Seattle has invested a late first round pick and a late second round pick on Jackson and Tapp. The two project, working strictly from this data, as below average defensive ends. It might seem premature, but if Seattle selects a defensive end with the fourth overall pick, there's reason and data to support it. It's Seattle's best chance to select a cornerstone player on a defense with aspirations of greatness.