Share All sharing options for: The Tape: Avoiding Aaron Curry 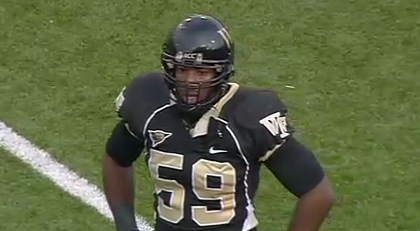 Boston College runs a pro-style offense. It had two talented tight ends, one that now plays for the Tampa Bay Bucs. Aaron Curry had five solo tackles, five assists, a tackle for a loss and a fumble recovery in Wake Forest's game against Boston College. I start my analysis of Curry with BC, because though the Golden Eagles featured a 39th ranked offense, that offense is the closest Curry saw to a pro offense, and that offense challenged a broad base of skills from Curry. It featured him attacking the tight end. It featured him in coverage. It featured him blitzing. Actually, it featured all that in just the first drive.

Curry spent much of the first series smashing into BC freshman tight end Lars Anderson. He engaged and shed the 248 pound freshman (with good blocking potential), but BC simply ran away from him.

That's a subtle reminder that no matter how good, an outside linebacker can be pretty easily avoided. Half of all runs in the NFL are run up the middle, and even runs to the edges are influenced by the interior line. On the second play, BC runs off-tackle left. Curry again punishes and pursues, but it's backside pursuit and the play is over long before he arrives.

Curry started the next play five yards off the line of scrimmage and shading towards the slot receiver. Split-seconds before the snap he rushes the lines, hits and drives back Anderson, contains the edge and pursues but does not factor in the tackle. Quarterback Chris Crane runs wide-left.

BC subs in receiving tight end, former tight end prospect and now undrafted signing by the Bucs Ryan Purvis. Curry plays over Purvis. At the snap, Curry disrupts Purvis off the line and then settles into lockdown coverage on a shallow crossing route. Crane misses Brandon Robinson flashing open on a post route and misses what should have been a sure score. Alphonso Smith is beat but not exposed.

It's third and seven and Wake Forest shifts into a 3-3 with Curry playing middle linebacker. The front-six stunts in a six-man blitz reminiscent of John Marshall. Curry penetrates through the middle, but the play is a draw. Curry circles back into the hole and nearly tracks down Josh Haden, but only after 14 and the first.

Curry punishes Anderson and seals the edge but otherwise does not factor.

Essentially ditto, but for once Curry fails to shed Anderson.

It's 3rd and 3 at the Wake Forest eight. Wake breaks in a 4-2 nickel with Curry at the left outside linebacker position. Curry pops into a short zone, Anderson fires off the line of scrimmage and cutting right and away from Curry slips to the ground leaving Curry assignment-less. Situational defensive end and younger than Peria Jerry grad student Matt Robinson tracks down Crane and sacks him for a loss of seven.