The Tape: Better than Scouted

Share All sharing options for: The Tape: Better than Scouted

I had the Funk and Wagnalls encyclopedia as a child and thus realize encyclopedias were inaccurate long before Wikipedia. I once believed lemmings committed mass suicide during population booms, a myth influenced by an Academy Award winning Disney documentary and the creative use of a turntable. The truth is sometimes more interesting than the myth, but typically not. Nevertheless, though truth often has the collective forces of history and public opinion* against it, it's worth discovering. Not for any high-minded reason, say, but so you're not the dupe at the party with the fallacious factoids. Or because facts tend to be more predictive than falsehoods.

I use play-by-play to make my scouting more efficient. It allows me to jump to relevant plays, anticipate the play and track the action. Since I'm scouting a top ten pick, I thought I would also include the opinions of other scouts. NFL Draft Scout has a feature entitled 2008 Game Analysis. I just discovered it today. Looking at it the first time, I was impressed, almost intimidated by its breadth and depth. It details every game of the 2008 season. Surely someone who scouted so comprehensively and so deeply would know more about Curry than I ever could.

After an impressive first quarter for Aaron Curry, I girded myself for a rough series when I read:

During a drive that started at the top of the second quarter, Curry was flagged for being offside, allowed a 21-yard completion to receiver Brandon Robinson, and gave up a 13-yard run by quarterback Chris Crane on a draw, before bringing down QB Dominique Davis for a 1-yard loss in the red zone

1. "Curry was flagged for being offside"

Curry was flagged for being offside and Wake Forest penalized five yards.

Robinson was Boston College's leading and #1 receiver. One might wonder why Curry was covering him at all, but Curry wasn't. Curry starts on the offensive right. Robinson is also aligned right, but is covered by Alphonso Smith. After the snap, Curry shades over running back Josh Haden running into the right flat. He does a good job of containing Haden while reading quarterback Chris Crane's eyes. This allows him to slide towards Robinson when Crane locks on, winds and passes at the wide receiver. Robinson is open because Smith breaks coverage. Curry A) does a good job of jumping into Crane's throwing lane (if a second too late) and B) does a good job of tracking down and tackling Robinson after Robinson plows through Smith's initial hit. If Curry does anything wrong, it's that he attacks Robinson too high and allows a little extra run after catch, but c'mon. He shouldn't even be involved in the play.

3. Curry shifts left in a strategy designed to drive me crazy. He holds the point against Lars Anderson, but does not otherwise factor.

4. "and gave up a 13-yard run by quarterback Chris Crane on a draw"

It was a zone read and saying Curry "gave up" the yardage is to say not only is Curry responsible for both sides of the field, but also responsible for Deacon linebacker Chantz McClinic picking him out of the play. 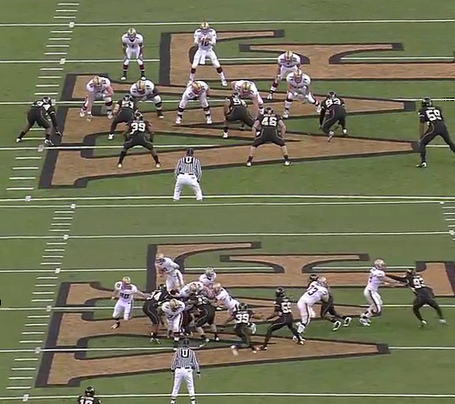 Curry is playing left-outside linebacker on a linebacker trio that's shifted left. So he's extended outside the tackle box and pretty far from where the play starts and ends. Boston College has Haden right, Ryan Purvis playing half-back left and Crane between them in shotgun. As the play starts, the right back, Haden, cuts across Crane towards the left. Middle linebacker Matt Woodlief plays blocker buster and attacks the pile. McClinic bites on the initial move and strays so far offensive left he's nearly standing on Curry's shoes. Which is a problem, because Curry knows what the hell is going on. Before McClinic is setting the pick, Curry is containing Haden's hole and influencing Crane to keep it. Crane runs right. That's where end Antonio Wilson is supposed to be setting the edge, but isn't, and where McClinic is supposed to contain, but hasn't. Curry begins to break offensive right, runs into and then around the still clueless McClinic, cuts across the field, man-slaps NFL guard prospect Thomas Claiborne to the turf, and tackles Crane after 13. 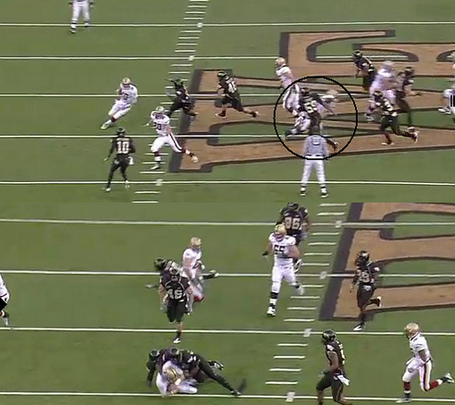 It's an easy play to remember and should stand out on any scouting report, because it's the play Curry drove Crane shoulder-first into the turf, injured him, and forced him out of the game.

*But I repeat myself.