Why did Champ Bailey have a quiet year in 2008 while Cortland Finnegan erupted onto the scene? Tennessee built a better dam.

While the Seahawks have one of the best linebacking corps in all of football headed into the 2009 season, many people were still against drafting an expensive linebacker at 4th overall. I was one of those people. I'm not against the idea of Aaron Curry, as all signs point to him becoming an excellent linebacker for years to come. Rather, I would have preferred the Hawks spend their defensive dollars on fixing the damn instead of buying better buckets.

I started thinking about this concept after reading something John wrote while evaluating Aaron Curry (using Patrick Willis as an example):

However you slice it, Willis has not been transformative in the way Albert Haynesworth, DeMarcus Ware or Jared Allen have been.

I thought about why that would be, and that lead to thinking about analogous systems. Ultimately, I settled on the idea that trying to repress an offense is similar to trying to hold back a river. The best way to do so is to build a sturdy dam. If the dam starts to leak, you'd better have wonderful buckets to catch the remaining water.

A good defensive line causes havoc in both the run and pass games. Collapse and destroy the offensive line, and running lanes close and the quarterback runs out of time. The best place to stop an offense is at the source, in and around the backfield. Even the best defensive backs can only cover for so long. While linebackers can also fill the gaps and pressure the quarterback, committing more field resources towards doing so reduces the ability to cover and take on blockers downfield.

There's an economic argument to be made as well. In a system with unlimited resources, there would be no excuse to not sign the best available players at every position. However, given that salary caps are finite, teams need to spend money carefully. Outside of Albert Haynesworth, there weren't an awful lot of transformative defensive lineman available this offseason. Instead, the Seahawks are investing a significant chunk of their cap on linebackers; Seattle has chosen to go with an imperfect dam, hoping that their buckets will be good enough make up for that.

I'm not trying to fault the Seahawks in this case, as there may not have been better ways to spend the resources this offseason. Passing on Aaron Curry and letting Leroy Hill walk would not have been great decisions, given where the Hawks stood at the time. I just hope the long term goal is to help the great linebacking corps with this: 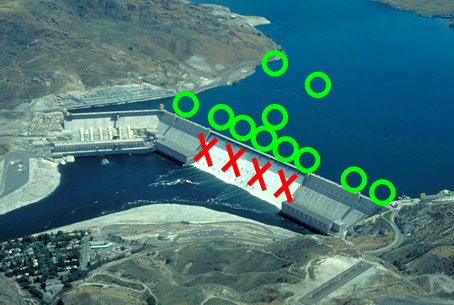