Share All sharing options for: The Tape: Deon Butler Catches the Ball

I just caught this. With five seconds left on the play clock and Jordan Norwood still not set, Butler looks over and yells, "Hurry up! Hurry up!" Then he did this. 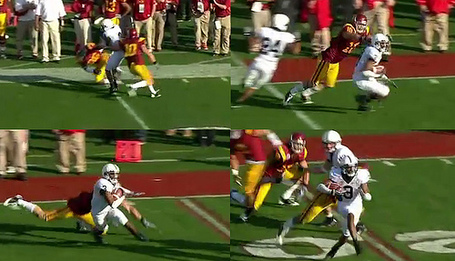 He was subbed out the next two plays before finally recording an official, in the gamebook reception. It was for 28 yards. It was less impressive than the nullified play. It was a little bit troubling.

Penn: Butler (left), 2WR (right), offset-I (left). Butler runs a post pattern, but it bends out towards the sideline and then loops into the cut. I can't know if the was the way the play is designed, but if we figure this was supposed to be a generic 25 yard post pattern, Butler's route is round and long. He loops from the sideline and separates because of a speed advantage not deception Pinkard is near him right away and there's no run after catch. The pass eats him up a little, too. He stumbles into the pass allowing the ball to almost squirt between his hands and isn't tackled but falls and is then fell upon.

Butler is subbed out on the next play, Daryll Clark sneaks for nine and the score, and that's the first quarter.