WCD: Patience and the Power of a Delayed Blitz

Share All sharing options for: WCD: Patience and the Power of a Delayed Blitz

Seattle's defense came alive in the second half. Not in any one particular game, but throughout the preseason. Seattle's defense came alive when the starters sat. The standout performances of Nick Reed, Michael Bennett, Derek Walker and Will Herring contributed to that. The drop in talent of opposing offenses contributed. The scheme made it happen.

The defense went from vanilla to spumoni. Any play Herring gets a sack has to be pistachio.

How did it happen? It wasn't an accident, but Herring wasn't blitzing. He was reacting. 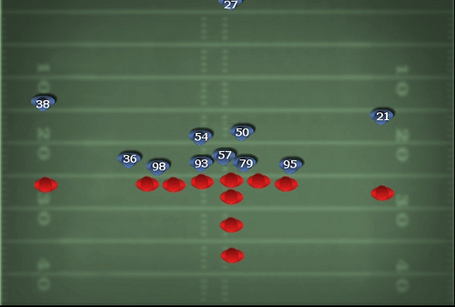 Seattle starts with eight in the box. It unabashedly stacks defenders over the center. Kansas City is two wide, tight end left with the backs in an "I" formation. Tyler Thigpen play-fakes and then sets in the pocket. 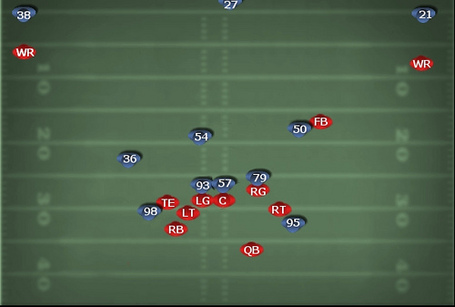 Craig Terrill is first off the snap and aided by Hawthorne the two knock back the Chiefs center and left guard. Nick Reed flies around the tight end and draws the support block of the running back. Lawrence Jackson forces back and then frees himself from the right tackle. His pressure forces Thigpen to step up into the pocket. 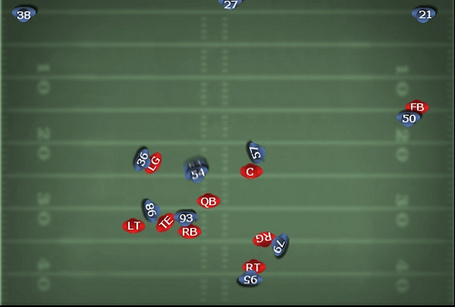 The fullback releases into the right flat, but Laury drops back and covers him. Had Seattle blitzed seven off the snap, the fullback would be an uncovered outlet receiver with room to convert the first. Had Seattle blitzed six, the Chiefs max protect would have swallowed it and Thigpen could step into the pocket and target Seattle's cover three or rush for good yardage. Instead, the fullback is covered, Kansas City is inadvertently triple teaming Reed and a scramble into the pocket is met by Herring reading, reacting and attacking. Sacking Thigpen for a loss of three, Herring proves patience and flexibility can make a defense deadly.

Five defenders blitz off the snap.