Seattle unleashed Aaron Curry on the Raiders. It took one play for him to humiliate a veteran, but the shaming he put on Cornell Green was Puritanical. Curry only contributed to this blitz. He was the wrecking ball that toppled the wrapped and surrounded JaMarcus Russell.

Oakland is unbalanced left. It sets with two wide receivers and its tight end left, its running back center and a lone wide receiver on the right. Seattle is in a 4-3 under. 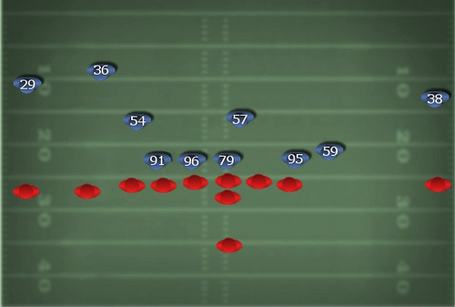 Curry sprints off the line. He's a full step ahead of even Michael Bennett. He holds a wide line and forces Green to shade clear into Oakland's end zone. Bennett, Red Bryant and Lawrence Jackson are bullying back the Raiders remaining offensive line. The least push comes from Baraka Atkins, matched against tight end Zach Miller. Linebackers Will Herring and David Hawthorne spy the running back and quarterback, respectively. 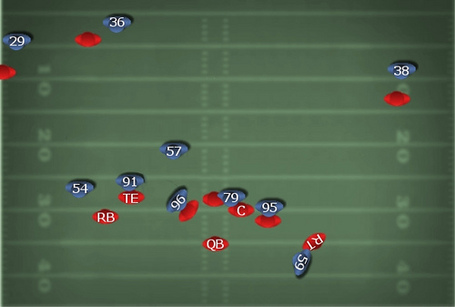 Green can't keep up and soon Curry is turning the corner and rushing Russell from behind. The pocket is collapsed and Russell is double-clutching and delaying. Jackson has beat the right guard. Bryant has collapsed the interior, concentrating his force on the center, but drawing support attention from the left guard. The left guard is overloaded, because the left tackle is backed in and almost to Russell by Bennett. Atkins is keeping Miller busy, but not creating much pressure. The space between the left tackle and tight end is stretched by the pressure and David Hawthorne shoots the gap. He wraps but doesn't fell Russell. Curry explodes through Russell and completes the sack. 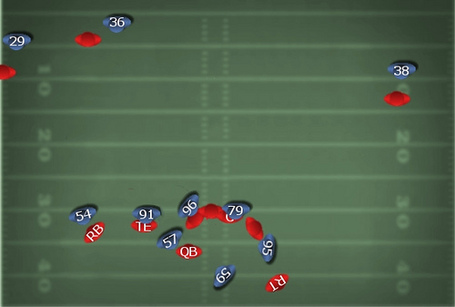 Only Curry is assigned to blitz. Will Herring and Hawthorne delay, and blitz when opportune.