Goodbye to the Fullback Draw and Hello to the New, Improved Bobby Engram

Share All sharing options for: Goodbye to the Fullback Draw and Hello to the New, Improved Bobby Engram

Seattle had played itself into third and six. It was within field goal range and didn't want to end the drive empty handed. That's a momentum killer and bad football. Mike Holmgren called a fullback draw for four and signaled for Brownie.

Seattle split four wide, shotgun with Justin Forsett on Matt Hasselbeck's right. Greg Knapp stacked the wides with speed and put power and possession in the middle. There wasn't much to it really, it looked like this. 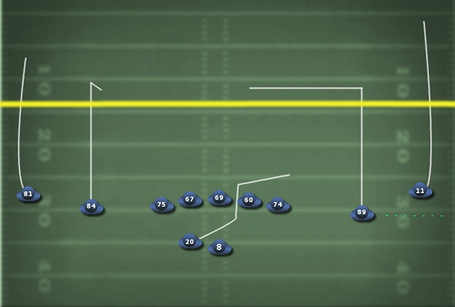 It does assume a few things that are refreshing. A timing route can be run out of shotgun. A third and six is makeable and should be attacked aggressively. Seattle doesn't attempt to squirt under the line and count on run after catch. It doesn't get cute with underneath routes to protect Hasselbeck. The offense sends out five: two deep, two two-yards past the first-down marker and Justin Forsett underneath squeaking into the flat. T.J. Houshmandzadeh reads the coverage and settles into a quick-curl. Hasselbeck hits him out of his break. Shades of Bobby Engram. Hasselbeck and Houshmandzadeh already have that kind of timing, trust and chemistry.