San Francisco Batters, Beats Down and Injures the Seattle Seahawks in an Overwhelming 23 to 10 Victory

Share All sharing options for: San Francisco Batters, Beats Down and Injures the Seattle Seahawks in an Overwhelming 23 to 10 Victory

Seattle lost a road game without its single most important player and its depth stretched to its limits. That is not a bad loss. Seattle lost Matt Hasselbeck, Lofa Tatupu, Josh Wilson and Sean Locklear. It started today's game without Chris Spencer, Deion Branch, Walter Jones, Marcus Trufant, Brandon Mebane and Leroy Hill. Injuries ended Seattle's season in 2008 and after two weeks, they are threatening to end 2009. Hasselbeck's injury alone endangers the season.

Seattle showed a lot of heart to hold itself in this game, but if there was any doubt that the Seahawks depth could not beat the 49ers starters, there is no doubt now. The final score indicates a balanced game. This was not a close game. It was a dominant game by San Francisco. The 49ers beat down, brushed off and humiliated the Seahawks. 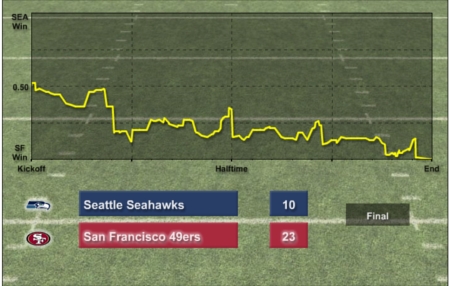 The Seahawks are 1-1. If Hasselbeck misses significant time, that record doesn't matter. Seattle has probability against it. Injuries are scattered across so many players and so many players with significant injury histories that a critical talent will miss time. Seattle cannot replace Brandon Mebane, but Mebane should be ready for next week's game. Seattle cannot replace Wilson, Tatupu, Locklear and Walter Jones, if Jones is not ready for next week. Those player's status, and the status of players we do not yet know are injured, is unknown.

The Seahawks are 1-1, because the quality, depth, age and health of this team casts them as a 8-8 team with minor upside and significant downside. The Seahawks are spiraling down the path of downside, and we won't know how far they've already fallen until later this week.

A fan cannot enter a season with their mind made up. I did not think Seattle would contend in 2009, but I wanted to be wrong, wrong, wrong. So, in a game where everything went wrong and hopes of contention were obliterated, it is exciting to see a young player that flunked his first season produce like Jackson has. Lawrence Jackson recorded two sacks off flawless edge rushes. He forced a fumble and was involved in several other plays. Late first round defensive ends do not typically become franchise ends. Jackson is a long ways away from that, but he showed today that he could a huge asset for Seattle going forward. Jackson is signed to a five-year, $11.25 million dollar contract. That's a bargain for a league average end. He was much more than that today.