Matt Hasselbeck did not appear on the NFL injury report in 2005. He has appeared at least once every other season he has been a starting quarterback. Hasselbeck has endured injuries to his knee, shoulders, thigh, back, hand, neck, elbow, groin and hip. He has picked himself up and put together a fine NFL career. This is not a discussion about Hasselbeck's toughness, pain tolerance or ability to withstand injury. My intention is only to challenge my assumption that Hasselbeck has played worse when he played injured.

The NFL is notoriously tight-lipped about the status of its players. Coaches and players are protective about the information and the NFL accepts a certain amount of gamesmanship with the injury report. The reasoning is obvious. An NFL player is not one thing. He is a range of things depending on the condition of his body. That is most obvious with running backs. Injuries can cut down a back from the height of his career to retirement in no time. It affects all players, though. Or so is common knowledge and my understanding of the game, but do we see that pattern in Hasselbeck? Has he played significantly worse when injured?

Hasselbeck has appeared on the injury report 38 times. For his career he has averaged 5.8 adjusted net yards per attempt. He has played 13 times after appearing on the injury report. He averaged 4.3 adjusted yards per attempt in those games. His moving average represents a steep decline from his youth to his present. His good injured games have been less good and his bad injured games worse. 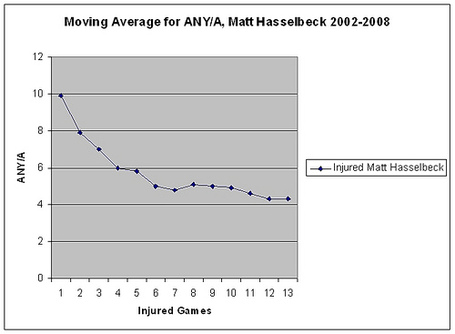