This week begin the end of the preseason. I would like to go out in style. I've left a lot of loose ends. I want to preview Greg Knapp's offense and specifically his play calling. I want to explore how Seattle's first week starters work within that offense and where they are and where they are strong. I want to give the same treatment for Jim Mora, Gus Bradley and Dan Quinn's defense. Quinn's name will be thrown around a lot in the next four to five months, so remember him. He looks like a star in the making.

Without further prelude, let's explore Seattle's opening drive against Denver. Seattle moved seventy yards on eight offensive plays, scoring the touchdown with 34 yard pass to Deon Butler. The goal of the following exercise is to connect the first play, an incompletion, to the final play, a touchdown pass. I've replaced T.J. Duckett with Edgerrin James.

This play is designed to create matchup problems and promote yards after catch. 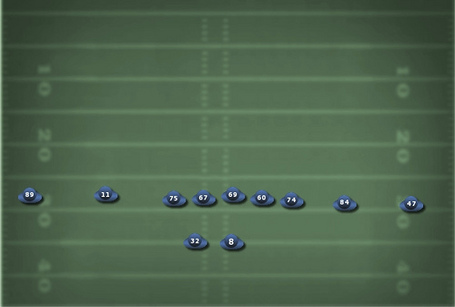 Tight ends John Carlson and John Owens are split wide. Wide receivers T.J. Houshmandzadeh and Deon Butler are playing the slot. It's a symmetrical formation. The left is on the line. The right is just off the line.

Matt Hasselbeck takes a three step drop and sails a pass over Houshmandzadeh's head. The defense, and specifically, Andre Davis' delay blitz do not factor. The pass is a mistake caused by inaccuracy or a confused route. Carlson and Owens draw deep cover. Butler and Housh attempt to attack the exposed middle. Houshmandzadeh's cut is flawless. Butler's has a little wind up that telegraphs a cut, but not a cut where. Housh is cutting while Butler is still stopping his momentum. 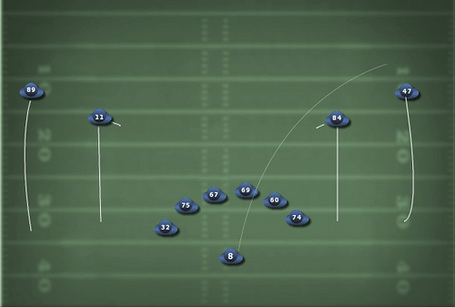 Essential Details: The featured receivers are in the slot.

Matt takes a three step drop out of shotgun.

James is a designated blocker, creating a six-man pocket.