Seattle adjusts its formation slightly but not its personnel type. T.J. Houshmandzadeh subs for Deion Branch, but the Seahawks are still 2 WR, TE, I formation. 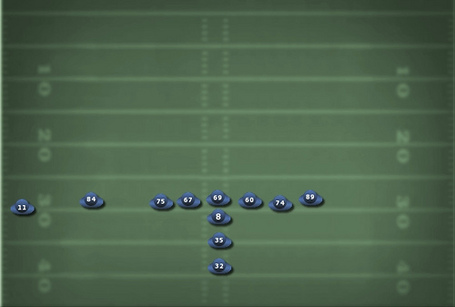 Seattle is running a stretch right. The right side of its line is handling the simple chore of bulling Denver right. The left side handles the pull blocking. Sean Locklear ignores the left outside linebacker (Elvis Dumervil) and slides underneath towards the left "A" gap. Rob Sims knocks back the right defensive end off the snap and then sheds to engage the left inside linebacker (D.J. Williams). He fails to engage. 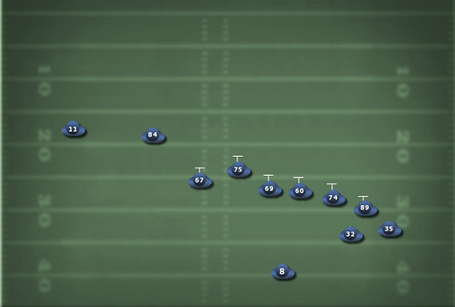 Owen Schmitt and T.J. Duckett run up and then horizontal towards the right flat. Both are aiming for the right edge, off tight end John Carlson. Locklear pulls through the left "A" gap but misses a block on the right inside linebacker (Davis). Duckett doesn't show sufficient speed to get to the edge and is tackled from behind by Davis. Williams hits him from the front preventing a more effective fall forward.

Seattle's left side blocks in space.

Locklear does not block Davis.

Sims does not block Williams.

Duckett does not pass the line of scrimmage before Davis has tracked him down from behind.