It's third and two, but Seattle sets three wide and in shotgun. Prior to the snap, Deon Butler motions inside and just behind and to the right of T.J. Houshmandzadeh. He bounces twice and Chris Spencer snaps the ball. The snap count is built off the motion.

Greg Knapp is faced with third and short but calls a deep passing play. Only Justin Forsett's release into the right flat is conservative, and he's blitz protection. Butler runs a drag route left. Carlson works through the mess and runs a deep crossing pattern right. Deion Branch runs deep. Houshmandzadeh runs ten yards up and then cuts crisply in. He is running towards the space Branch's deep pattern has cleared out. 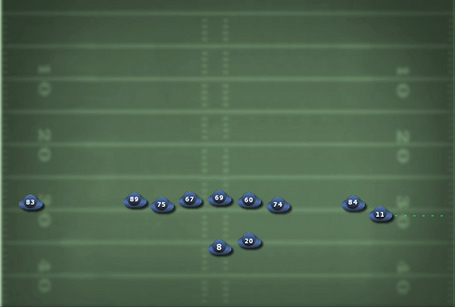 Denver blitzes five. The right outside linebacker stretches Sean Locklear. The remaining four run stunts, with the inside man cutting out. Rob Sims puts a very good block on the right defensive end, but does not adjust to the nose tackle stunting into his vacated zone. Chris Spencer attempts to assume Sims block on the end, but nose tackle Ronald Fields is through the line of scrimmage and free before Sims can adjust. Hasselbeck finds Houshmandzadeh running away from safety Renaldo Hill, hits him in stride, and Housh runs before being bookended by Hill and safety Darcel McBath. 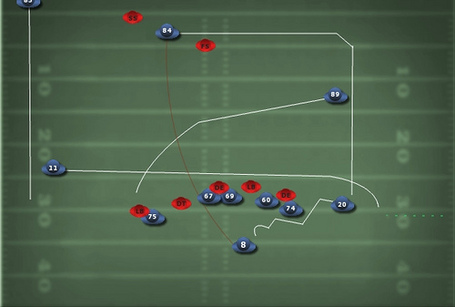 Forsett is open in case of pressure.

Sims misses his block, but Fields is slow.

Branch clears out the left.