The first preseason moment that inspired the rush of discovery was Darryl Tapp dropping into cover from the end-backer position. He showed this look against San Diego in week one, and the play design and execution was superb. The power is in the details. 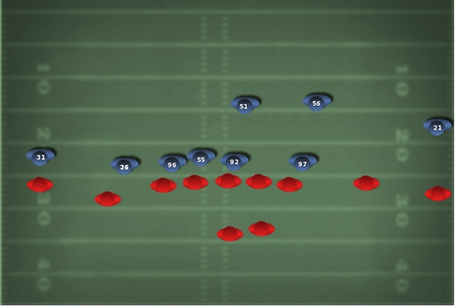 Seattle has overloaded the offensive left. It has three viable pass rushers and two viable pass defenders within the left offensive "A" to "C" gaps. Tapp is standing and Josh Wilson is not over his receiver, but angled slightly in like he might edge rush. Tapp and Wilson's versatility disguise the play. Tapp starts by pressuring the edge, but then moves inside between Cory Redding and Brandon Mebane.

Joining Redding and Mebane on the line is Patrick Kerney. Kerney is playing left defensive end. Mebane and Redding want to create sufficient pressure to isolate Kerney on Jeromey Clary. Unlike John Marshall-designed three-man rushes that included such double-team busting luminaries as Craig Terrill and Lawrence Jackson, Redding and Mebane are fast off the snap and excellent bull rushers.

In the second level, Seattle has Ken Lucas and Kelly Jennings protecting the left and right flats respectively. Lucas is up, threatening press. Lofa Tatupu and Leroy Hill are clumped over the right slot receiver and the running back at Philip Rivers' right hip. Deon Grant and Brian Russell are in deep cover.

At the snap, Tapp drops into cover. He is alone covering the shallow middle. Tatupu drops into deep middle cover. Wilson and Hill cover the left and right, just inside the flats and near the first down marker.

Mebane rushes the center. Redding bullies the blindside edge and Kerney gets his matchup. He turns the corner but is pushed into the turf by Clary. After Kerney is neutralized, Rivers should have ample time to read and find an open man, but the pre-snap look, progress around the edge by Kerney, and pressure from the middle and blindside spook Rivers into passing. He never sees Kerney is planted. 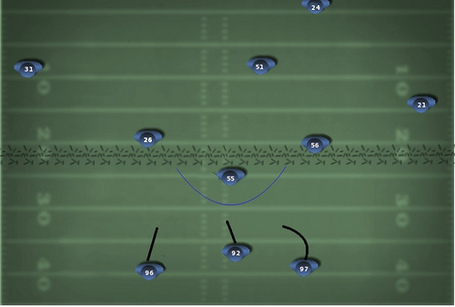 (Note: The pattern represents a separation between the area near the line of scrimmage and the secondary.)

The play finds a hole in the zone. It's open, but closing. Malcolm Floyd receives between Tatupu and Grant, and the two snap shut like a steel trap. Floyd is bounced and the ball bounced from his hands.

Essential details: Seattle starts in a pre-snap formation that can effectively blitz or drop into cover.

The right players rush the passer.

Tapp's agility and awareness is used to defend the underneath route.

Grant and Tatupu show good zone awareness and smash Floyd for an incomplete.