Share All sharing options for: Seahawks at Raiders Win Probability

The blowout was a late bloomer, but the coming loss started as early as the Seahawks three and out that ended the first quarter and began the second. The fourth quarter collapse was painful but largely irrelevant to the game's outcome.

I am not quick to pronounce "game over." In fact, am almost unhealthy in my ability to imagine scenarios in which the Seahawks can overcome any deficit. But according to Brian Burke's win probability model, a 10-0 deficit late in the second quarter is a good indication of eventual loss. Seattle opened the second half with an 18% chance of victory.

Crazy, and that doesn't even account for Oakland's home field advantage or Seattle's inept offense. 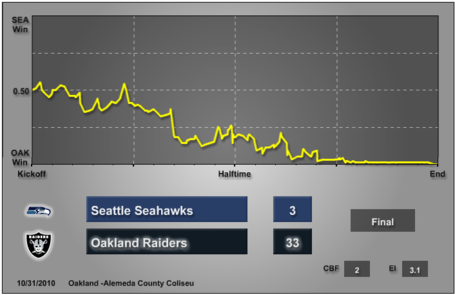