One Pass Attempt with Charlie Whitehurst

Share All sharing options for: One Pass Attempt with Charlie Whitehurst

Charlie Whitehurst attempted 23 passes and two were intercepted. Both intercepted passes targeted Mike Williams. One, after careful inspection, is almost entirely Williams' fault. The other is ambiguous.

It's striking how much those two passes shape Whitehurst's final stat line. Using the Pro Football Reference standard of adjusted net yards per attempt, which awards 20 yards for a touchdown instead of the 10 I usually use, the outcome of those two attempts changes Whitehurst's final ANY/A from 7.9 if the passes are completed, which is spectacular, to 1.9 with the interceptions intact, which, I don't need to tell you, is very poor.

I am not so much excusing Whitehurst as pointing out how insufficient a sample one game provides. Especially since Whitehurst's failures were so concentrated. It's such a small sample, in fact, changing those two interceptions into receptions pushes Whitehurst's completion percentage over 60%!

I was very critical of Whitehurst after the Seahawks traded for him. I am not, for a lack of a better way to put it, a Whitehurst "apologist", but the argument for Whitehurst getting another start is not simply that Matt Hasselbeck has struggled for years, it is rather that Whitehurst did not show enough one way or another on Sunday to truly determine anything. Our perception of Whitehurst hangs on two plays and an outcome.

We start with the first of Whitehurst's two interceptions. There are few absolutes in football, but I think it's very clear that this interception is mostly bad luck with a big assist from Williams.

Whitehurst stumbles out of his backpedal. Seattle retains seven blockers and Whitehurst is unhurried. He sees Williams breaking in front of Terrell Thomas, waits just a split second, and fires. The pass hits Williams in the hands, but Thomas is on his back and reaching around and possibly interfering with the reception. It's not clear at first, but later in the broadcast, Fox shows us some quality camera angles. The interception looks like this. 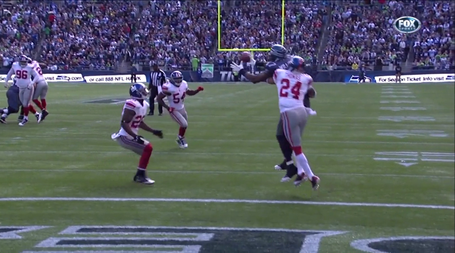 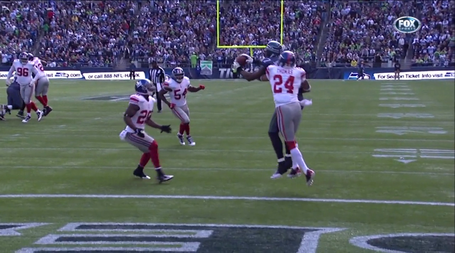 At this point, it looks like Williams is about to secure the football. Thomas has his arm between Williams' two arms but does not poke the football free. 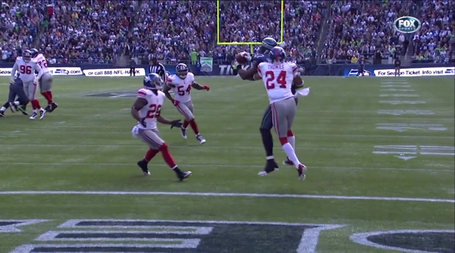 We begin to see the pass slide through his left hand.

Here's that matchup isolated and larger so you can see the two important details. 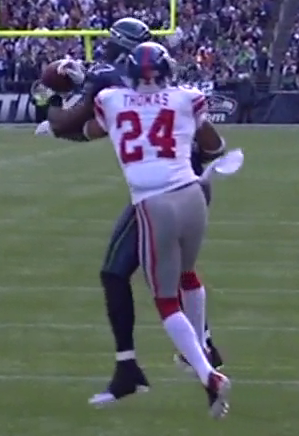 Notice Thomas's left arm is under Williams' left arm, perhaps influencing the reception but not in a way Williams shouldn't be able to fight through. Notice Williams' right hand is no longer gripping the football but making a semi-fist. Finally, we get the payoff. 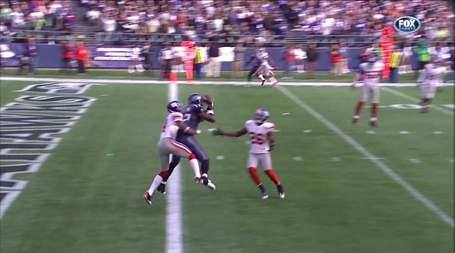 Williams right arm slaps the ball up, it tumbles over his helmet, Thomas throws Williams aside and dives for the interception.

This is tight coverage. Part of that is Seattle keeps in seven blockers. Part of that is interception rates skyrocket as win probability approaches zero and defenses are emboldened to "put it away." And Whitehurst's timing isn't perfect-perfect, but it's more than good enough. Whitehurst's pass produces that first and second picture, but Thomas's coverage and Williams' continued struggles securing a pass in traffic cause a bobble and then an interception.