Larry Fitzgerald Was Out of Bounds

Share All sharing options for: Larry Fitzgerald Was Out of Bounds

LaRod Stephens-Howling returned the opening kick off 52 yards in play where both Matt McCoy and Will Herring shifted hard left. Special teams is especially hard to deduce, because of the speed and comparative looseness of it, and especially because of the preferred camera angle which zooms on the returner. So that's up to the coaching staff to assign credit and blame for, but this looked like a pretty major kick off coverage failure. Stephens-Howling was able to run almost straight up the hash marks.

This post covers the Cardinals short scoring drive. It was mostly Stephens-Howling's return and Larry Fitzgerald's long reception. I am not inclined to agree or disagree with officials, but do not think enough fact checking is done on questionable calls.

Brandon Mebane shot off his block and Kentwan Balmer closed from the back side and the two met to wrap Tim Hightower after a gain of one.

Here's the big play. Seattle rushes seven but generates little pressure. Clemons does a decent job on a bull rush on the right and that contributes to Derek Anderson throwing flat footed, but rushing seven and creating very little pressure is a set up to get burned. Seattle does, but, well ... 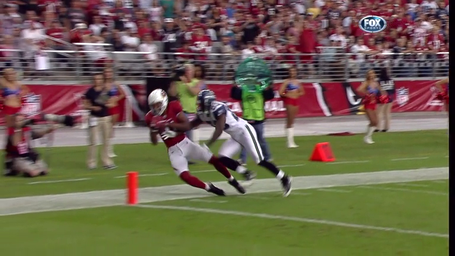 It looks like his left foot touches down out of bounds before his right foot can contact the turf in bounds, but I do respect that the officials stuck with the ruling on the field. The one thing that is not entirely clear is whether Fitzgerald's left foot is touching out of bounds or if it's ever so slightly above the turf. Hard to say, but if it's not touching, it's microns above the turf.

Mebane wins his matchup and seals off the outside and almost, almost catches Hightower for a loss. It was so tantalizingly close that I initially blamed him in part for the touchdown, but that's not the case. Instead, this is one of those moments the Seahawks miss Red Bryant. Bryant may not have surely prevented this touchdown, but the Seahawks run defense breaks down with replacement strongside end Balmer.

It's simple really. Siavii is turned and lost in the scrum. Lofa Tatupu could fill if he was free, but right tackle Brandon Keith was all over him. Keith reaches Tatupu after single blocking Balmer and passing him on to tight end Ben Patrick. Bryant, by contrast, was much harder to pass by, occupying and controlling blockers. He also would likely be able to crash down on the hole if blocked one-on-one by a tight end. Instead, a lead blocker reaches the second level and the rusher shoots the rush lane untouched for the touchdown.