Seattle traveled to Arizona, doubled up the Cardinals 36-18 and regained first place in the NFC West. That's the good news. You don't need me to point that out. The final outcome of the game, the result, the big showing by Hasselbeck, it's all sort of blurred the reality of the game. Not that Seattle eked out a win or won on the strength of timing and big breaks, but this was a close game for most of the first half. 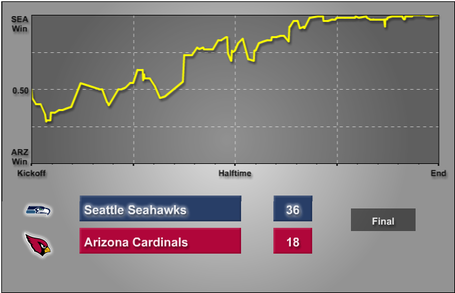 That big ~20% gain is Deon Butler's 63 yard touchdown reception. That reception accounts for about a quarter of Butler's total yardage this season. It was a big play and a fun play to watch, and a bittersweet reminder just how important the big play is. Not since Shaun Alexander's prime has Seattle had a big play talent. Someone that could change the entire course of a game with a play. Maybe someone already on the roster, Butler or Tate or Williams, can take over that role eventually, but for now, I'll just go ahead and rewind and re-watch Beck to Butler a few dozen more times.

Seattle played Thomas shallow for a change, not in-the-box shallow but 10 to 15 yards deep. He broke on LaRod Stephens-Howling and wrestled him out bounds with authority. It's good see some attitude from Thomas, not that he hasn't flashed it before.

Mike Williams runs a hitch and go and that forces very minor contact by Toler. It's amazing how ambiguous pass interference and defensive holding penalties are.

(The hold was pretty blatant and rightfully called, which sucks, because Obo absolutely went off. If you didn't see the game, track down this highlight. Ben Obomanu made his case for starting wide receiver all over University of Phoenix Stadium. Calais Campbell forced the hold, by the way.)

Billick pinned this on Adrian Wilson, but looking at the coverage scheme and Wilson's reaction, it sure looked like Toler was to blame.

Seattle sticks with five blockers, which, yeah, I'm happy. Chris Baker comes wide open on an out into the left flat. This is also when Toler breaks coverage on Obomanu. He bows out as if to cover Baker and then continues in on Obo, and that accounts for most of the separation. Ben's somewhere between Toler (left) and Wilson (middle, right) but more or less wide open.

Whip route that Butler inexplicably breaks in. He is clear to the outside but doesn't trust his acceleration (?) and instead breaks in and directly into Kerry Rhodes. This pass should have converted the first and prevented the ensuing disaster.

Matt had room on the left to convert the first but was tripped by Stacy Andrews. Bryan Robinson forced back Andrews. It's been said by everyone else including Pete Carroll, but this was bad play call. Even if you want to attempt the first, a quarterback sneak should be off the table.

(Cardinals take over at the 16)

On the plus side, Lofa Tatupu runs with Steve Breaston. On the negative side, Tats really can't get his head around and make any kind of play on the ball. As if par for the course: the Seahawks generate pretty much no pressure. Seattle has improved at blitzing, but as far as generating pressure from its front four, it's not too much better than it was in 2009. And it was awful in 2009.

Then we get: errant pass to Fitzgerald, drop and I mean DROP by Breaston, pressure incomplete by Andre Roberts featuring tight coverage by Kam Chancellor, punt, Matt to the locker room, kneel down, end of the first half.