I promised my wife I would spend time with her on her day off, and so I will preemptively say this is the only post today.

This covers the first half of the third quarter. Charlie Whitehurst led two drives. Seattle squashed a Cardinals drive. More than anything, Seattle's skill position talent stepped up.

Here's a selection of interesting plays.

The only benefit of trading for Marshawn Lynch, so far, is the resurgent play of Justin Forsett. Forsett has 182 yards in 34 attempts since Seattle traded for Lynch. That isn't really the measure of a rushing attack, but we can improve it a little bit. Adjusting for quality of run defense and weighting for attempts against, an average rusher would have 138.4 yards in 34 attempts against the Bears, Cardinals, Raiders and Giants. So if Forsett's real yards per attempt is 5.35 and an average rusher's yards per attempt against the same opponents is 4.07, Forsett is performing at 131% of average.

That's good, because rushes by Lynch have not produced. He is only averaging 2.9 yards per attempt. That's acceptable for a goal line back and just barely, but not for a feature back. It's hard to impeach Lynch for the results. He certainly runs tough. His burst hasn't shown up, I will say that, but otherwise, I think Lynch is carrying the torch for a bad rush offense that, when Lynch is in the ball game, faces defenses much more likely to sell out to stop the run. Seattle traded for Lynch in hopes of fixing their struggling run game, but as it turned out, just added another struggling rusher to start in front of Forsett. I wonder what Julius Jones thinks of that.

As for this play, the blocking wasn't anything special. Chester Pitts slipped off Calais Campbell. Tyler Polumbus pulled into the second level and put a hand on Clark Haggans, but served more as pick than blocker. The Cardinals had shifted their line right and that helped create a soft edge behind left tackle, but mostly, this was just about Force flashing his burst. He ran past Campbell lunging at him in the hole, he ran past Gerald Hayes as he exited the hole, and from there it was Justin loose in the third level, speed curve flattening, lowering his shoulder and burning down 29 yards of grass like a prairie fire.

Seattle ran play action and Lynch ran a speed out towards the right flat. Whitehurst found him and Lynch cut across the field for most of the yardage gained. One of those plays that count on a quarterback's stat sheet but really belong to the receiver.

In contrast, this was all Whitehurst. So many mistakes concentrated into one play. Billick said, and I paraphrase, that another play like this and Whitehurst would never leave the bench again. This is one of those times I do appreciate a coach's perspective, because I imagine Pete Carroll was thinking the same thing. And Bates. And Arnie my Pop Warner coach.

Deon Butler is on the left. He runs a double move. That's the primary. Ben Obomanu is on the right. He runs a hitch. So the timing on these two routes is different. One is long developing and the other is bang-bang*. 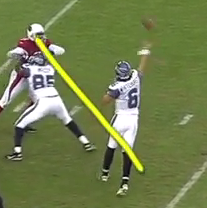 I think the technical term for it is The Reverse River Dance. So, and from a quarterback with arm strength to burn, the pass is slow and easily picked by Dominique Rodgers-Cromartie. In the ensuing pursuit and tackle, Sean Locklear rolls up Anthony McCoy's legs. Collateral damage.

Luckily, Seattle put out the fire. Chris Clemons did his linebacker thing, and I am quite impressed with his run stuffing ability (though, naturally, not his ability to hold the point). Then this happened.

Clemons tipped the screen pass away, but the rushed delivery and discord was forced by a perfectly timed safety blitz by Lawyer Milloy. He's so good at that.

The drive ended after Anderson couldn't find Larry Fitzgerald and Fitzgerald couldn't make a beautiful catch. Kelly Jennings got a little grabby, bracing himself on Fitz's shoulder and then grabbing and releasing as he fell away from the receiver. Fitzgerald lost him on the break and Jennings was recovering. Nothing blatant, but further proof of the subjective nature of officiating, and that bad teams don't get calls.

I can't remember the last time Seattle pulled off an end around. This was all Obomanu. Carlson attempted to lead block, whiffed against Joey Porter, but continued on and was able to influence Kerry Rhodes. Obomanu ran past and through the halfhearted tackle attempt by Porter and up the field for 13.

It didn't occur to me until just now, but two of the standout skill position performers for Seattle, Forsett and Obomanu, were seventh round picks by Tim Ruskell. Go figure.

Forsett ran for 24 yards on two runs. The first featured a dominant block by Chris Spencer, but was off left end. Chris Baker was able to create the edge by forcing Campbell into the pile. And Stacy Andrews, well, he's big and he gets in the way even when he doesn't land a block. It's something. Mostly, Force is quick through the hole, or, at least, as quick as a Seahawks back gets -- not named Leon Washington.

The other run was a pitch left that featured Lynch at fullback and a little misdirection. Maybe we'll see more of that. Whatever results in more touches by Forsett.

Self sack. Looked like a broken or at least malfunctioning play.

Give up inside hand off, which tells us that Bates either doesn't trust Whitehurst either -- and maybe he shouldn't -- or that Bates is suffering an advanced case of Overly Cautious Coach Syndrome. The run doesn't work and doesn't significantly improve Seattle's chances of kicking the field goal. Seattle gave up.

So be it. Matt returned for the next drive.

*Michael Fox criticized the overturned fumble by Mike Williams. Basically, I think he's right. There isn't a clear enough distinction between a "bang-bang" incomplete and a reception-fumble. Williams didn't perform a football move, but I'm not too sure that's why the ruling on the field was overturned. Rather, it looked like Williams' own inability to quickly secure the pass is why. He was still bobbling the reception as he pulled it into his body. Or rather the ball was still moving within his hands. The officials cited "two feet down", which was observably false. It wasn't a clean reception and so it wasn't a fumble, I guess. More power to the Seahawks.

It's not a great rule, I agree, and it's tenable only insomuch that it's uncommon.

As for the play itself, it must be noted that this fumble along with a handful of similar close calls that broke Seattle's way greatly impacted the outcome of the game. A few weeks ago, after Seattle had won in Chicago and before I reviewed the tape, I believed Seattle was a mediocre to good team. I miss that. Seattle beat the Cardinals, and the final score certainly indicates a level of dominance, but the Seahawks didn't dominate Arizona. And Arizona, by every reliable measure, is horrendous.