Seattle had sparred with Arizona far too long. They were up on points but coasting in a matchup they should be crushing. It was time to loose some hooks and uppercuts. It was time for the Seahawks defense to make orphans of Derek Anderson's children.

It takes a teammate for Kelly Jennings to intercept a pass. Jordan Babineaux was aligned across from Steve Breaston. Breaston was in the left slot. He covered Breaston through the first part of his route and then passed him on to Earl Thomas.

Then he did that Babs thing. That ability Babineaux has to become a much better player in the moment. To put it into overdrive. He turned, tracked the ball flying towards Larry Fitzgerald and cut under the route just in time to tip it up and directly to Jennings. Interception.

Ben Obomanu dropped a sure touchdown but an illegal contact penalty gave Seattle a do over. They squandered it, mostly, but a couple plays struck me as worth pointing out.

Swing passes out of the back field to Justin Forsett. Both involved five blockers. I will talk about this is in a later post -- lot I want to cover today -- but this is where this offense is going. It's changing. It's no longer Matt shoehorned into a system developed around Jay Cutler. And if they stick with it, and if a healthy Russell Okung makes it tenable against all kinds of pass rush, it could be a difference making shift in scheme.

Seahawks show a 3-4 look and blitz five. Lofa Tatupu jams Stephen Spach and Lawyer Milloy picks him up as he crosses towards the right flat. This is vital, because it removes Anderson's outlet. The sack isn't fast-fast, about three seconds in, but it's against seven blockers. It's relatively fast. Also, it's goddamn beautiful.

Aaron Curry is powerful. Rare powerful. Kentwan Balmer draws Levi Brown and that allows Curry into the back field unblocked, but a double team awaits him. Arizona has seven blockers in and two dedicated to Curry.

So he does this:

Which, if you'd like a little narration, is Curry taking his left arm and shoving Ben Patrick away and into Tim Hightower before redirecting and exploding Derek Anderson. Clemons sees the loose ball and deftly scoops it for the recovery.

Seattle was again held to field goal on the resulting drive. There was some bad run blocking that contributed, but some good run blocking that was squandered. Marshawn Lynch hasn't made a habit of this, thank goodness, but this is never fun to see. 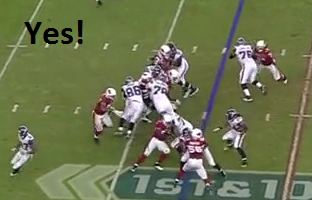 Right into the blocker. 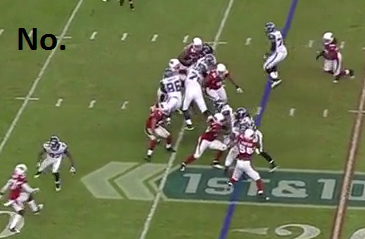 With the kind of run blocking the Seahawks have mustered, you can't squander any holes, Marshawn.

One nice route combination that resulted in a 10 yard reception by Mike Williams, two blown blocks by Tyler Polumbus and one by Chester Pitts, and a throw away later and Seattle kicked another field goal.

Inhuman jump by Chris Clemons and borderline legal and Clemons is around Brown in a flash. He then runs through Hightower and into Anderson for a sack. 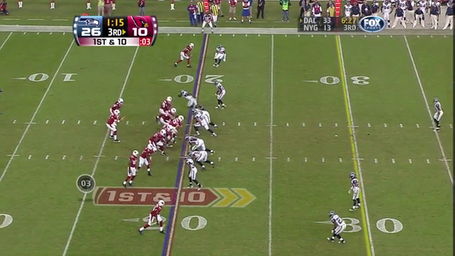 Curry works from under tackle opposite the left guard-left tackle gap. He then attacks hard left towards the center-left guard gap and rips through Alan Faneca and to Anderson. Anderson throws a errant pass to avoid the sack. So. Very. Awesome to see Curry tapping into his potential as a pass rusher. His rip on Faneca is something to behold. Flat out domination.

Clemons and Raheem Brock ended the Cardinals drive with bookend pressure that forced another incomplete pass.

The Seahawks were done playing with their prey. It was time to tear off meaty chunks.