Why the Seahawks Offense Fails, the Deep Passing Attack

Share All sharing options for: Why the Seahawks Offense Fails, the Deep Passing Attack

I noticed something striking about Seattle's loss to Oakland last Sunday. The Raiders had 10 or 11 players within ten yards of the line of scrimmage on play after play. I don't have a version to take screen caps from yet, but it's a look we have seen from the Cardinals, 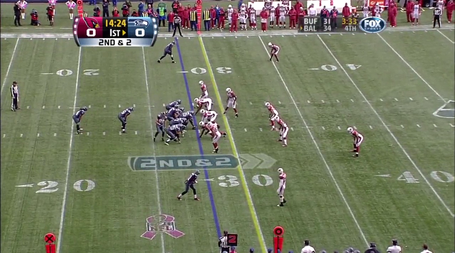 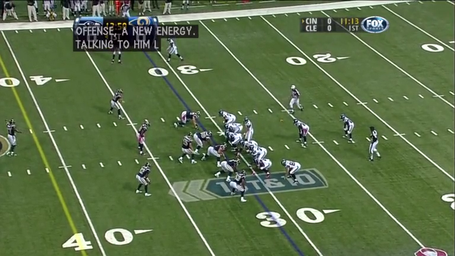 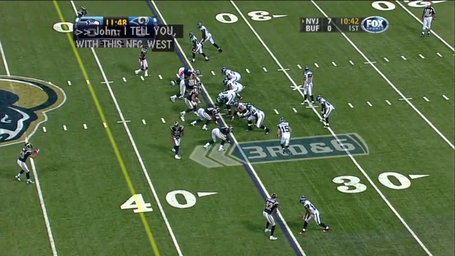 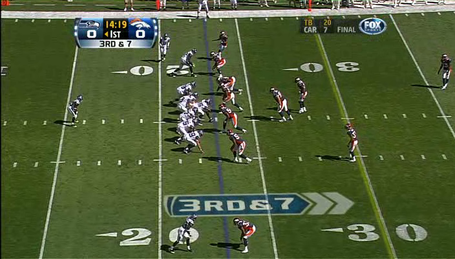 Lots of different down and distance, and personnel groupings, but all four images have a couple things in common: a single deep safety and nine to ten players within five yards of the line of scrimmage.

It's not uncommon for a team to put a lot of players near the line of scrimmage, and I know at least for the Cardinals, that's not a strategy designed to stop the Seahawks. Adrian Wilson is an in-the-box safety. That's how they run their defense. I compared how Arizona lined up to stop similar packages in similar down and distance against the Saints, and I saw similar formations and spacing.

But what I wondered is, why is this so effective. The Cardinals and Rams are both slightly above average pass defenses, and the Broncos and Raiders are among the league's worst, but all were able to completely shut down the Seahawks. Compare that to the Chargers and Bears, two teams Seattle had decent success passing against, and two top five pass offenses.

Again, I think it's about spacing. 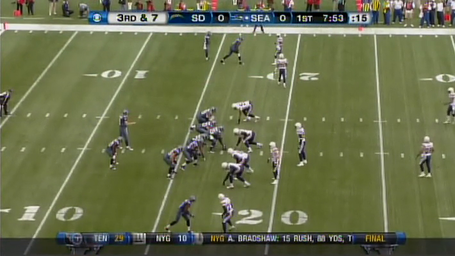 and against a balanced run-pass look. 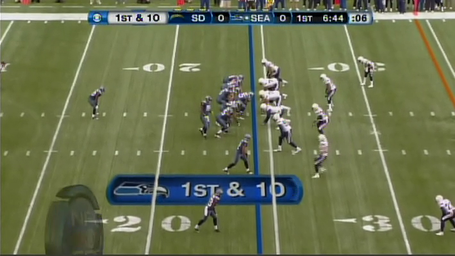 and the Bears in their customary two deep look. 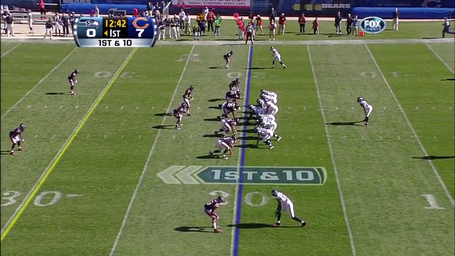 Teams that do not respect Seattle's ability to throw deep, and instead jam the short field by blitzing, run blitzing, attacking the short passing game, and stuffing the run, seem to have more success against the Seahawks.

Is it because Seattle lacks a deep passing attack?

Maybe, but first we need to figure out if the Seahawks lack a deep passing attack. Some may accept is as evident, but let's see what the numbers say. How does the Seahawks passing offense perform on passes marked deep?

My method to figure that out is simple: I went through the play-by-play, searching for passes marked "deep." I didn't count illegal contact penalties but I did count pass interference penalties as receptions. I excluded Michael Robinson's deep pass, because it was a trick play. The NFL seems to mark anything past 15 yards as deep, which is a debatable definition, but for the sake of consistency, let's just use that. I counted 47 passes listed as deep.

That seems pretty bad on the surface. A lot has to happen right for a long attempt to be made, including pass protection and, typically, an open receiver down field. We should expect the completion percentage to be low, but 29.8% seems particularly low.

On the face of it, it seems like opposing defenses have good reason not to respect the Seahawks deep passing attack, but does Seattle compare to similarly weak passing games. Is Seattle particularly bad at completing deep passes, or is its ineptness at completing deep passes simply a function of its overall poor passing game. The next thing I will check out is how Seattle's deep passing offense compares to other teams with similar overall numbers.