Following some success with the deep pass, Seattle has forced both safeties back. Woot.

Carlson's motion creates confusion. Jonathan Vilma and Roman Harper chase right, Harper stops and Vilma is not able to cover before the snap. He has a lot of space on a quick hitch, but Hass reads Lynch. 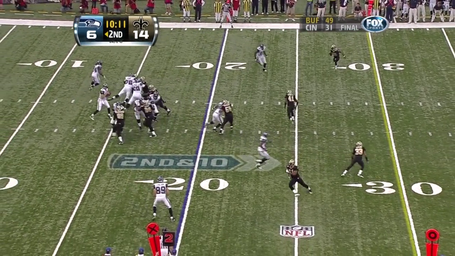 Saints rush five. Seahawks block with five. Chris Spencer allows Remi Ayodele straight up the gut. Matt needs to dish it and quick. Lynch holds up ever so slightly running the swing pattern and the pass arrives out in front. Hasselbeck is trying to lead him but Lynch isn't game. He stabs his left hand out at the ball but it tumbles away incomplete.

Hasselbeck has a clean pocket and targets Ben Obomanu running an out or more likely a very flat corner or flag route. The pass falls wide and out of bounds. Maybe a bad pass and maybe a bad pattern.

Hasselbeck takes it and zips it to Obo in the slot. Obomanu is uncovered. Not to grouse, but so, so many NFL offenses get quality production out of this kind of route, but Seattle hasn't been able to run it effectively in years. A few deep passes later and routes like this open up. Mike Williams blocks out Tracy Porter. Obo catches and runs straight up field for an automatic ten.

Rush five. Block five. Three step drop. Matt targets Baker running an out. Shanle's all over him. The pass leads Baker too much and Baker can only reach for it before it continues out of bounds, incomplete.

Wonder why Hasselbeck rushed the throw.

Both corners are playing way off. Hasselbeck takes it and throws it left and Williams catches, but Porter is all over it. Williams squares with Porter, does that rec league shimmy-shimmy thing and is tackled after three. Still, three yards.

Matt locks on to Williams. Williams is facing very soft coverage. Porter is initially about ten yards off, and when Williams crosses the first down marker, Porter bites deep. Williams curls in front of Porter and jumps and catches and turns up field for another five.

Seattle takes a time out.