Before we dive into this, a couple quick announcements. Well that's too elevated sounding. A couple quick notes.

This is the last post of this series. This time last year, I had to ratchet down my posting and start working on the book. This year, the opposite. We know the situation the Seahawks are in. We know that there is very, very little chance that Seattle transforms into a regular season powerhouse, but that Seattle still has some chance of making a surprise playoff run. To achieve that, Seattle needs to continue to improve and specifically continue to improve their run defense. Etc.

Over the next month and half, depending on when Seattle's season ends, I am going to throw this into overdrive. Earl(ier) to bed and earl(ier) to rise and more posting and of a higher quality, hopefully. Instead of worrying about where this team is going -- there's plenty of time for that in the new year -- I want to suspend disbelief and just lose myself in the playoff run. It may be the last in a long time. It's certainly the first in a while.

We will have a couple more posts today. This, something regarding injuries and something something Cpt. Morgan liquor cola. You all go on and watch college football as I pound these plastic keys.

We left off with a 15 yard completion to Mike Williams. It was "allowed" insomuch that New Orleans was protecting itself against the deep pattern and that opened space underneath. Jumping ahead a little bit, I wonder if Seattle will be able to continue tossing deep this Sunday. The Saints were starting an injury replacement at free safety. The Chiefs may be without starting free safety Jon McGraw and starting cornerback Brandon Flowers. We know Jabari Greer was burned badly on two deep attempts, and it's unlikely Seattle will be able to surprise Kansas City like they surprised New Orleans. However, the threat of the deep pass may be enough to open up some underneath patterns.

Of course if I was Romeo Crennel I would be about 100 pounds heavier. Also, I would challenge Seattle to beat my defense deep because two weeks shouldn't be enough to drastically change my perception of a passing offense, but I'm not Crennel and football coaches seem like a reactive bunch. We'll see.

Saints are in zone coverage and Williams is uncovered in the right slot. Matt Hasselbeck receives and zips it to him underneath. Receptions like this are pretty much entirely on the receiver's shoulders. There isn't much skill in taking the snap and throwing it horizontally to an uncovered receiver.

Jonathan Vilma points right-right-right before the snap and Vilma and Scott Shanle break towards Williams pretty immediately. I know Gregg Williams is very respected, but this is the kind of bend but don't break style that sunk Seattle. Three yards is a respectable gain on first and ten, and New Orleans let Seattle have it. If that was Golden Tate in the slot, it could have been housed. Or dropped. Or fumbled. Probably just dropped.

Five blockers. Four pass rushers. Justin Forsett releases into a stop route. Shanle moves towards Baker in a misguided attempt at doubling the tight end. Force is wide open. Maybe's it a running back option route, but Hasselbeck targets like Forsett is running and out and the pass sails wide incomplete.

This is definitely one of those plays where it's hard as a fan to know who is at fault.

Of course it's a blitz. Saints rush six. Seahawks block with seven.

Brandon Stokley is uncovered and runs free from left slot into a ten-yard curl. Jonathan Vilma runs from over right guard towards the left slot, but he's pretty dang far from covering Stokley. This is either a missed assignment or a suicidal play call. For what it's worth, Usama Young was covering deep over Williams, in sort of a Brian Russell fashion, and that left New Orleans down a coverage defender.

Also, maybe this is Gregg Williams' response to being up 15 points: allow Seattle to inch down the field in hopes of forcing a turnover. Something to consider anyway. It might seem disloyal for me to scour for alternative explanations to Seattle's offense breaking out, but when a bottom five passing offense blows up against a top five pass defense, the burden of proof falls on the Seahawks offense, because the most likely explanation is that this was a one-week anomaly.

Want to know what it takes to be an elite right defensive end or left tackle? 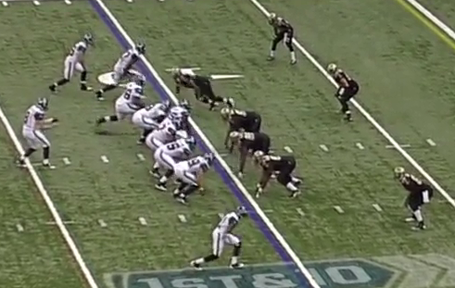 Ridiculous quickness off the snap.

Hasselbeck locks onto Stokes, but Stokley and William's respective patterns are complementary and very close together. Stokley releases into a curl as Williams continues on and runs and out. In some sense, Stokley's pattern is dead. He has run his route and stopped and there's no longer a chance to get separation out of the break. Porter breaks coverage on Stokley and doubles Williams. This is when Shanle should adjust and play under Stokley, and if he does, Matt probably has to throw it away or scramble. 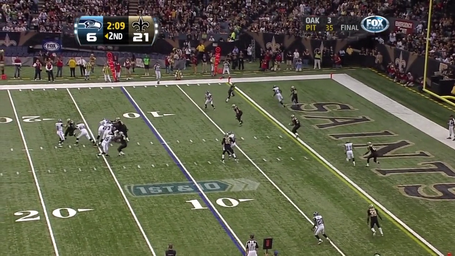 But Shanle doesn't do his part and Hasselbeck targets Stokley for an easy eight.

This is a mistake, of course, but it's also why sending five instead of three is almost always advantageous. Ten defenders did everything right, but one missed his conditional assignment. Completion.

Following a two yard run to put Seattle on the one, Matt throws for his only touchdown.

Obo executes to perfection. It's written all over Jeremy Bates' face. 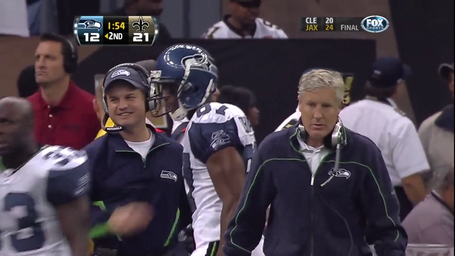 What Obo does is read the blitz, the linebacker that looks to be in coverage before the snap, and adjust his route into a quick curl. Ben's the hot read. Vilma should adjust. He should stay back and let Roman Harper single cover Carlson, but instead both cover Carlson and Obomanu is wide open over the middle. Matt finds him for an easy touchdown. This is the passing offense clicking.

We have one more drive before I post some conclusions. This one started with one minute left on the game clock. It was successful. It was also, unfortunately, following a 54 second touchdown drive by the Saints. And that drive was made possible by a bogus roughing the passer penalty. It didn't help that Lofa Tatupu ate toast for breakfast.

If only the pass offense and pass defense could show up in the same game, right?

Just as soon as Brees' comb-forward fools anyone.

Drive starts at the 40 after Garrett Hartley kicks it out of bounds. Brian Billick's favorite Seahawks, Justin Forsett, smartly watches it roll out of bounds. Force is such a pro. What a find. What a steal in the seventh.

Both corners are playing well off the receiver--about nine deep.

It's single coverage across the field, with Usama Young again not doing much of anything. Ben Obomanu runs a streak, or so it looks, but short stops in front of Greer and jumps and receives. This is an interesting development. Instead of beating the corner deep, as Seattle attempted with Deon Butler, larger receivers like Obo and Williams run deep, create single coverage and then win with size and positioning. Pretty clever: deep routes underneath.

Seattle rushes to the line.

Rush four. Block five. Forsett begins by blocking but releases into a route. Stokley is matched against Vilma. Stokes and Matt play this perfectly. Porter is chasing Williams but, ball in the air, breaks cover to pick up Stokley. Vilma is on his inside and out of position. Matt places it on Stokley's outside shoulder. No defensive back can influence the pass and, upon receiving, Stokley can immediately break towards the left sideline and run out of bounds. This is as-drawn-up and truly masterful football.

Saints rush five and Anthony Hargrove bulls right through Chester Pitts. Obo catches a curl, but this play is invalidated by penalty. Both literally and for purposes of analysis. Without the hold, Hargrove is wearing a Matt-splashed rib bib.

Saints rush four. Seahawks initially block with seven, but Forsett outlets left. He hasn't finished his route when shit hits the fan. Vilma waits until Sean Locklear has committed inside and then attacks off right end. Right about this same time, Hasselbeck is thinking about rolling right to hopefully free something up. He is looking at three against seven and it looks bad. It looks like facing the Raiders all over again. 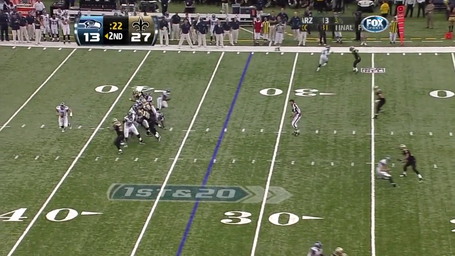 Locklear doesn't block Vilma, but it's a tough assignment. I don't blame Sean. This is on Jeremy and it's on Matt. Frustratingly enough, if Hasselbeck can only muscle it a couple more yards, he's clearly outside of the pocket.

The intentional grounding forces second and 30.

Saints rush four. Seahawks block with six. Stokley slants into the void created by Mitchell and receives and runs up field for 18. Not sure if Stokes alters his route or not, but it's a gimme reception.