Share All sharing options for: On CBS Fantasy Football

I mostly use Yahoo myself. The reason is obvious: Yahoo is user friendly. It's convenient and convenience is king when little else separates one provider from another. Most everyone has a Yahoo account, and that means a lengthy step is skipped. Some might think, what's so hard about registering an account, but that's not how sales works. When someone has that impulse, you capture it, and the more hurdles you put in that person's way, the less likely you complete the sale.

On that note, I am going to use this post, mandated by the contract, to try and throw CBS a bone. I will offer easy suggestions to make their service better.

The team page is way too busy and the features people want (transactions, team editing, live scoring, draft results, rules, etc.) are not nearly prominent enough. People should be able to go to their league, to their team, make the changes they want and be done as quickly as possible. Don't jam the page with a "cover story" or "CBS sports video" and bury what people are there for.

I am not tech savvy, but I am good bit savvier than an average consumer, and I found the process of setting up the league, setting the scoring rules, the draft time and league invites to be clumsy and frustrating. Make the menus easier. Make important links more prominent. Don't make changes, like changes to draft time or changes to scoring rules, require multiple steps.

Check this out, how unbelievably clunky is this interface? 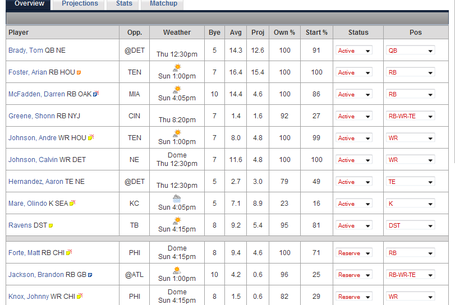 In a market where drag and drop interfaces are standard, CBS requires three steps to accomplish one move: designate position, determine active or inactive and set lineup. The designation of active or inactive on a grid that is split between "starters" and "bench" is entirely unnecessary. Terrible UI and totally unacceptable for something that is supposed to be fun.

Then, on top of that, this is how you add or drop players: 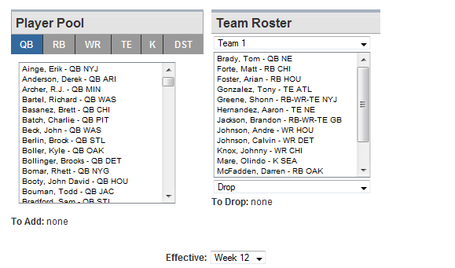 No stats. No links to player information. Alphabetical! Erik Ainge should not be atop any fantasy football list. Apart from the poor interface, it's butt ugly. It looks like CompuServe circa 1989.

Not good. Not everything has to be perfect, but setting a roster and adding and dropping talent are the two primary functions of playing fantasy football. Both are executed about as poorly as possible.

The commissioner should not have to change the rules to arrive at normal. Because, if they don't, or are not aware, league members are either going to be ambushed on draft day or very unhappy with their team.

All this boils down to ease of interaction for the consumer. You didn't make any deadly mistakes, CBS, like using a despicable, blood-sucking, disease-spreading, food-chain-exempt mascot. That would be deadly. But your fantasy setup as currently constructed is clunky, frustrating and never likely to attract users from simpler, more familiar and more fun services.