Seattle took a high-risk gamble early. I like Jeremy Bates. He's young and I'd rather he be radical and learn than conservative and prematurely gun shy. Plays like this don't help his case, whoever is truly at fault. People double down their resentment towards unorthodox failure. It's the same reason some coaches and fans simply cannot stand trick plays. The play doesn't just fail, it fails in awkward and embarrassing fashion.

It's fourth and a little more than half a foot. About two thirds the length of the ball. Any kind of push by the offensive line should award them the first. That's how football is officiated, especially for the home team. Seattle is bad in power situations, ranked 31st and converting only 42% of attempts. Kansas City is ranked 12th at defending power runs, preventing a conversion on 58% of attempts.

So, it's short enough that a run makes sense. Seattle is bad enough at running on short yardage and KC is good enough at defending short yardage, that maybe a run doesn't make sense. But if Seattle doesn't think it can convert less than a foot by running the ball, does it really make sense to pass? It would be a 57 yard field goal towards the closed end of Qwest Field. Olindo Mare's career long is 54 yards and like most kickers he is below 50% on attempts over 50 yards.

So you can't kick, you can't punt, or at least there's little reason to punt, you can't rush it up the middle, or you can but it's bad matchup, and so you pass? I guess.

But maybe not a fade route to Golden Tate.

KC sets with four down lineman and all their muscle concentrated towards the center. It's actually a 4-2, which should probably clue Seattle in that the Chiefs are anticipating pass.

Looking at this, I wonder why the Seahawks didn't audible to an off-tackle run behind Russell Okung. 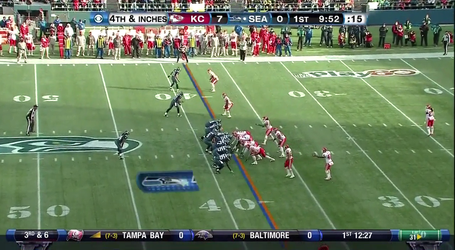 Hasselbeck takes the snap and looks left. He could probably pepper it in to Carlson. That looks like the best decision, but he's pretty locked on to Tate. He throws the fade, and it's not really a bad pass, but Carr wins position and Tate is forced into attempting something only Mike Williams and a handful of other receivers can do consistently: catch a pass over and in front of a defender.

He doesn't. Tate just doesn't have the reach. And the Seahawks turn the ball over on downs.