Why the Seahawks Offense Fails, Seahawks at Oakland: Second Quarter

Share All sharing options for: Why the Seahawks Offense Fails, Seahawks at Oakland: Second Quarter

Four factors control win probability: score, field position, time on the clock and possession. Possession is the most commonly ignored. A 10-0 lead is surmountable. A 10-0 lead does not feel, intuitively, like a game state that should produce a lopsided win probability in one team's favor--especially not in the second quarter. But the Raiders controlled possession. After taking the ball with 14:48 left in the half, Oakland would control possession 5:54, and then following a Seattle three and out, another 3:59 before punting.

Seattle's two big spikes in win probability, and I write big meaning relatively big, occurred when Seattle regained possession late in the first half. It didn't accomplish anything with those drives, and so those two modest upswings ended in net win probability lost. That has become the story of the Seahawks offense: squandered opportunities.

So why is this offense so terrible? Let's revisit the idea of arm strength.

Matt Hasselbeck lacks elite arm strength. When does that argument cease to be valid? It's not as if Hasselbeck physically can not throw the ball 40 yards down field. He can. He did last Sunday. He did and overthrew Mike Williams.

Hasselbeck never had great arm strength but it was sufficient. Years of hits and age have weakened it further. But arm strength and the ability to pass deep are different if connected qualities. Rex Grossman has an average arm but a pretty deep pass. Kyle Boller could throw it out of the stadium from his knees but couldn't connect on a skinny post if the route was run by a battleship. I have seen Matt connect deep. He's not incapable, even now, and his below average arm strength is not its most obvious on deep targets.

Instead, it shows itself in two more subtle ways.

1. His ability to fit passes into small windows.

2. His ability to throw a good pass when his mechanics go awry.

Let's see how those limitations play out and if maybe we can find any solutions.

We left off with Seattle running for four on second and 24. It sucked. It wasn't about to get any better.

Free safety Michael Huff closes within six yards prior to the snap. Oakland is showing blitz all the way. Raiders rush seven. Seattle blocks with six. So it's one-on-one across the field. Hasselbeck receives from shotgun. Pressure is threatening from all around, but penetrating protection from only position: right defensive end Kamerion Wimbley. Hasselbeck locks on to Tate. He throws it flat footed and the pass lofts high and towards the left sideline. Tate stops and struggles with Nnamdi Asomugha and is able to separate behind him but unable to make a tough one-handed catch. Either way, it's short of the first.

(Raiders score the knockout blow on a slant to Marcel Reece.)

That trace moment of excitement is gone in the flash of a three and out.

Tyler Polumbus pulls forward and blocks Rolando McClain. Quinton Ganther catches Quintin Groves coming around left end, and for a second a quality run is forming. But the safety in the box ends it. Stacy Andrews is not able to reach and block out Tyvon Branch. It's a hard assignment, blocking a safety in space. Failing that assignment is not a knock on Andrews, but it does end this play. Branch closes and catches Lynch and stops the run after four. Without Branch, there's no telling how far this run could have gone. 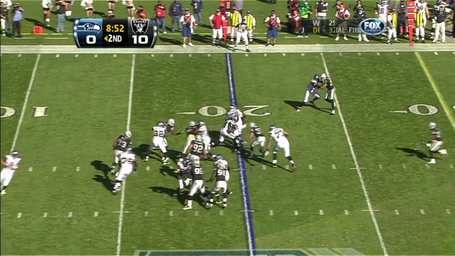 The deep safety is 11 yards deep.

Despite what the play-by-play says, Wimbley initiates the tackle. Wimbley is a rush linebacker that Marshall uses somewhat like he used Julian Peterson. I don't know how Lamarr Houston receives credit.

Despite the modest gain, this play works. Houston chases inside and Hasselbeck is able to roll right. Chris Baker is able cut and curl in front of Wimbley. Wimbley falls out of his break and Baker is wide open. I am not sure this play will always work. Matt might have struggled to roll right against a more experienced end, but it works on this play. I think it works because though the Raiders are stacked short, this play effectively stretches the field horizontally. The Raiders rush six and that leaves a rush linebacker in coverage. Seattle fakes play action and is able to find his tight end open.

Inevitably, Seattle needs to push the defense back and when it does, plays like this should become more effective.

What happens next falls on one man.

Seahawks line in a run-first formation: 2 TEs (left), WR (right), I-formation. And so, when the Raiders respond with

it's not simply because they do not respect the deep pass. It's because they anticipate run, and because they have Nnamdi Asomugha to cover the single wide receiver.

Seattle runs. Lynch attempts to find space off right tackle and finds only Houston tearing through Sean Locklear. That about ends it. Other people get the tackle, because "tackle" is probably the worst stat in football, but the play ends when Houston throws off Locklear and meets Lynch in the backfield. 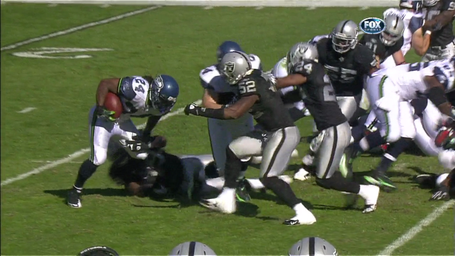 And another drive dies.

Bummed? It gets better.

Marshall sends six and Seattle responds by retaining seven blockers. Deon Butler runs his corner deep on the right. John Carlson runs a corner route towards the right sideline. Matt throws kind of flat-footed, but gets away with it because he is targeting a relatively short pattern and because Carlson is wide open. The defender assigned to block him, Rolando McClain, gets caught looking into the backfield and is badly out of position to defend the pass. Carlson receives and strides up the sideline for 35.

The ball lands about 13 yards vertically and maybe another ten horizontally, so, after a little quick mental geometry, the pass only travels about 16 to 17 yards through the air.  But it's deep enough to take advantage of the Raiders playing so close and blitzing so frequently.

Two play action passes short. Both work. It's something Denver does quite a bit, and maybe it's something Seattle should do more often.

It's subtle, but after the long completion, Seattle earns a little space to breath. 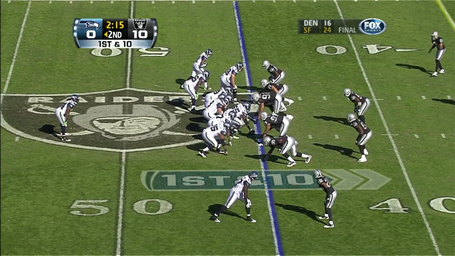 Which it doesn't do much with. 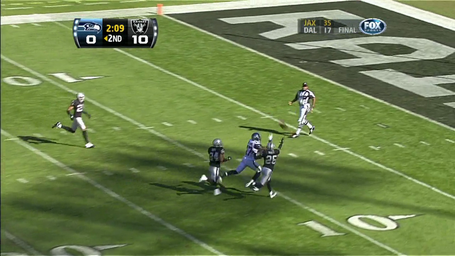 Apart from the overthrow, and apart from pointing out that Williams could have dove for the reception, there's at least one other failure I would like to point out, and it's becoming a nuisance. Seattle half-asses the play fake.

A good play fake is like a good magic trick. It suggests hand off and then turns into a pass, but before the pass is revealed, there should be a moment where it's not clear what is happening. A good play fake can cause defenders to chase the rusher. A great play fake can cause the cameraman to chase the rusher. I can't remember the last time either happened after a Seahawks play fake. Instead, what we get is a feigned hand off quickly pulled back long before the rusher and quarterback meet. It may serve to freeze the defense for a split second but that's the extent of it. Maybe I'm missing something and there is a practical reason to halfheartedly run a play fake, but it seems to me, if you're an offense without elite talent, that's struggling mightily, you can not afford to punt any potential advantage. And if Seattle is half-assing its play fakes for lack of concern, that's unacceptable.

So, anyway, Seattle earns a little space with a play-action pass that finds Carlson for 35 and then maybe gets a bit greedy by attempting another play-action pass, but it works except for the execution of the pass. This would seemingly be a hopeful sign. The second half would argue otherwise.

Tate is flagged for not lining up off the line of scrimmage, but he didn't have to, someone had to. Seattle was short someone on the line of scrimmage, and it could have been Tate or Carlson, etc. Acknowledging that, this play can be more or less interpreted for what it was before the penalty made it invalid.

Seattle retains seven blockers but the Raiders only rush four. That means the Seahawks should be dealing with dense/tight coverage and unfavorable matchups, but Tate is isolated on the left and Hasselbeck finds him coming out of his curl. He hits for 22, but it's all wiped out.

Dang, this has turned into a gosh darn treatise. Let's split this into two posts. I should really stop starting a post and looking up to see four hours have passed, it's discomfiting.