Why the Seahawks Offense Fails: Missed, Lost and Mistaken Routes

Share All sharing options for: Why the Seahawks Offense Fails: Missed, Lost and Mistaken Routes

Had Golden Tate or John Carlson lined up along the line of scrimmage, and Tate still been able to catch the 22-yard strike along the right sideline, well not strike, Seattle would have found itself in first and ten just outside the red zone. Instead the play was ruled dead and the Seahawks penalized five yards. Seattle failed to complete the next two passes, forcing a field goal attempt. Jim Mora's snarling visage pocked our television screens and Olindo Mare missed.

Seattle was eventually blown out, but I empathize with people who felt as if the game was a lot closer. For a little while, the game was close--in a way. Has Seattle disappeared into its locker room following the illegal procedure penalty and a far superior team reemerged and finished the drive, that ringer Seahawks squad could have easily overtaken the Raiders and won handily. The Raiders did not look like a great or dominating team.

That is exactly why this was a blow out though, and such a discouraging one. Oakland didn't put it away. Seattle did have its chances. Oakland didn't run Seattle off the field until the fourth. A better team could have easily overcome the Raiders two score advantage and won. But an average team was already in dire straits. And the 2010 Seahawks saw rough waters along the bay and promptly scuttled the ship, life rafts in tow.

Lets finish out the second and then cover the remaining meaningful portion of the game. I will break down every offensive snaps until Seattle fell behind by 23 in the fourth quarter, the Raiders win probability reached 99%, and the game was effectively over. Then I will finish with conclusions, and maybe offer some solutions.

It isn't often I watch tape and feel smart, but this play and a play that occurred in the Seahawks following drive, made me feel kind of smart. It was like remedial coloring all over again, and I was the last to eat my peppermint crayon.

Seattle retains seven blockers. Hasselbeck, the old West Coast wonk, really seems to struggle when his potential targets are limited. Retaining six and seven blockers is a real and debilitating reaction to poor offensive line play. It may not be as debilitating for all quarterbacks, but it certainly seems to bring out the worst in Hasselbeck. Matt more than anyone should hope for a speedy and complete recovery for Russell Okung. 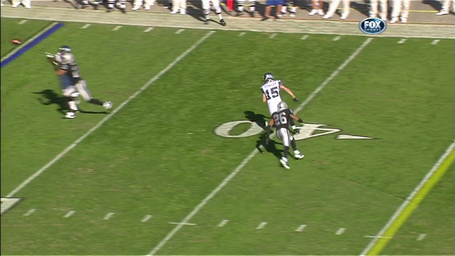 But Hasselbeck targets Obomanu. He throws flat footed and a bad read is coupled with a worse throw. As I mentioned yesterday, continually harping on Hasselbeck's failing arm strength has a way of absolving his mistakes. This wasn't a good read undone by a duck. This was a bad read, poorly executed and possibly saved from interception by an errant pass.

Carlson motions into split backs and stays in to block. Justin Forsett attempts to run an out towards the left flat, but gets held up by Rolando McClain, and that disrupts the timing of the route. Hasselbeck tosses towards where he thinks Forsett should be and the pass falls incomplete. The pass, regardless of Forsett's positioning, looks low and short.

(Raiders grant a do over)

That route combination I was so sure was designed to decoy Asomugha and free Stokley, Seattle runs it again, substituting Mike Williams for Obomanu. This time, Hasselbeck targets Stokley and Stokley receives for 13.

Seattle had Walter Jones in 2007, and Jones and Rob Sims, Chris Spencer, hoary Chris Gray and yet unbroken Sean Locklear constituted a pretty good line. Mike Holmgren always spread the field, the traditional WC guy he was, and Hasselbeck built a passing offense out of short passes to Maurice Morris, Leonard Weaver, Bobby Engram and Marcus Pollard. It was a good time for Seahawks fans and GBV joke enthusiasts the world over. As uninspiring as that collection of talent may seem, each of the above was strikingly valuable per target, ranging from 12.7% (Engram) to 25.7% (Pollard). How did he do it? Volume and ease of targets.

So this play was kind of mind blowing, if you will.

No additional blockers. Five routes, including the "in" run by Forsett that Matt completed like so: 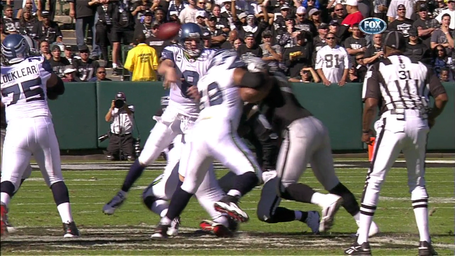 I'm not going to gush about phony heroics on the football field. This was pretty ballsy, but heroic? But here's a question I can't shake: how much better would Hasselbeck be if Seattle could consistently spread the field with five receivers? This play involved only five blockers, and before Forsett could finish a ten-yard "in" route, the line had collapsed on Hasselbeck like a mouse trap. He Favre'd it to Force for nine, but passes like the above are high risk propositions. We know it's out of Matt's character.

I don't buy into the magical power of an offensive line to make or ruin a quarterback, but what if Hasselbeck is only capable of being good, 2007-good, when he has multiple reads and a more favorable ratio between defenders and receivers? What if, right. Maybe we'll find out after he signs with the Browns.

Golden Tate is matched one-on-one against Jeremy Ware. Because pressure is pretty much never instantaneous, and a quarterback almost always has time to throw -- however much people want to warp reality to give the offensive line supernatural powers of failure -- Matt is able to loft it high towards Tate running up the right sideline. He throws flat footed, which is something I notice he does quite a bit, and it's a slow, hanging pass, but accurate. Tate high points it and receives but the heel of his left foot falls out of bounds as he lands. Incomplete.

Matt is pissed. Not to profile, but given the parties involved, I assume Tate ran the wrong route.

Raiders show blitz but rush only five. Seattle retains seven. Tate runs a curl in the right flat, and Hasselbeck targets as if throwing to a fade. It falls incomplete.

I am starting to understand why.