Share All sharing options for: The Great White Blur

So begins the descent.

Here's how Seattle's defense fails, in a play.

The Chiefs are unbalanced towards the "field" or wider side. There's isn't much of a field side in the pros because of the narrow hash marks, but it's interesting from a schematic level. Maybe an idea Charlie Weis imported from college.

Seattle is selling out to stop the pass. Ever since Mora brought in Bradley and Quinn, the Seahawks have highly specialized their defensive line. And that doesn't work, at least not on first and ten. Just because the Chiefs field three wide receivers does not mean they can not run the ball. And they do run the ball. Down Seattle's throat.

Seattle is set in nickel, with, from left to right, Chris Clemons-Brandon Mebane-Jay Richardson-Raheem Brock. Clemons is playing five technique, Mebane is over nose, Richardson is playing three, and Brock is also at five on the right. KC runs a stretch right, and things begin to break down right away.

Tony Moeaki is able to block out Brock without assistance.

Babineaux is blocked out by Terrance Copper.

The Seahawks are in bad shape.

Clemons is too far to the left. Ditto Will Herring. Mebane had to get penetration immediately because he's not going to track down Jamaal Charles from behind. He doesn't. Richardson, an end, is playing tackle. He's blocked out. Moeaki sets the edge against the Seahawks strong side end. Brock is out of it. Tatupu is battling a right tackle. That's bad. Babineaux, who must be able to play the run, struggles with Copper and then doesn't land a hit before Charles streaks past him.

There's one fail safe. One player that is supposed to step in when the Seahawks are tossed around. But Lawyer Milloy bones it. 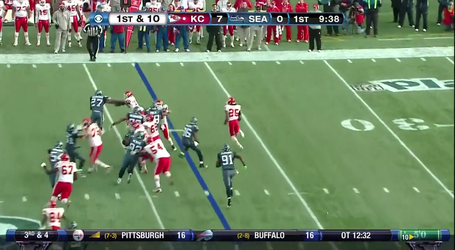 Milloy shoots inside around O'Callaghan and is immediately in a trail position against a much faster player.

Earl Thomas is able to cap it and Herring recovers to seal the tackle.

Seahawks are back to the Leo 4-3: Brock, Bane, Junior Siavii, Kentwan Balmer. Brock generates some very late pressure, but Cassel easily avoids him.

It's a play-action, seven-step drop. The snap happens just before 8:55 is about to turn into 8:54, and the pass is out right before 8:51 turns into 8:50. So it's four seconds in. Not all day, but plenty of time. And time creates this reception.

KC runs Seattle's coverage deep. Thomas Jones squirts through the middle and flashes open. Aaron Curry passes Bowe on to Tatupu. You read that right. It's actually done pretty well. He then closes on Jones but tackles high and Jones ducks and breaks through. Milloy closes to down him after eight, but though the missed tackle tacks on another three, time made this reception.

Siavii is doubled back past the first down marker and though Mebane controls and closes from the left, there's just too much push. Jones plunges ahead for three and the first.

This penalty made me so happy.

Siavii and Craig Terrill both get quality jumps off the line and the two make a mess of the interior. That allows Siavii to close on Jones in the backfield. To Jones credit, he doesn't get cute with it. He runs towards daylight, but Siavii and Tatupu are there to close the hole and stop the run.

David Hawthorne must enjoy the free tackle for a loss. He wasn't on the field. I hope that didn't factor into negotiations.

Seahawks send Roy Lewis on the dime blitz. Chiefs set up the screen pass on the right. (Didn't Denver destroy Seattle with a screen to Knowshon Moreno out of this exact same formation?) Brock reads it and closes. That buys Jordan Babineaux a little time, and he's able to explode through Casey Wiegmann and catch Jones for a loss of five.

Great play. By Babineaux. And Brock. Not Hawthorne.

Then: The Great White Blur Strikes! 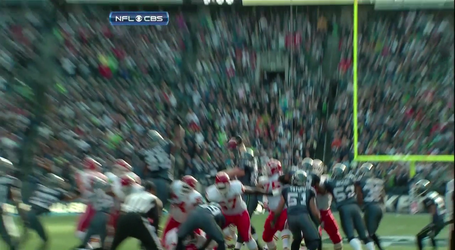 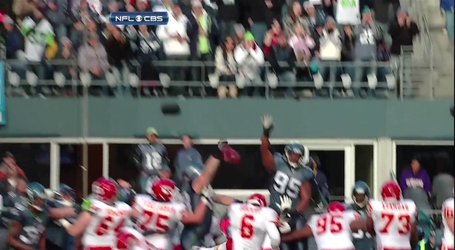