Seattle needed to change momentum, and what changes momentum like a blocked kick?

This is not a zone running play for a change. Mike Gibson pulls from left guard to off right tackle and Marshawn Lynch runs between Gibson and a very good block by Chris Baker on Mike Vrabel. Remember him? He's back, in Chief form.

And the run looks good -- though Lynch doesn't look particularly explosive -- the blocks are mostly set and he has a path into the second level, but one block fails and everything breaks down. Chris Spencer and Stacy Andrews combine to double the nose off the snap, and then Andrews separates and blocks Derrick Johnson. But he doesn't block Derrick Johnson, and Johnson makes the initial impact that stops Lynch and starts the gang tackle.

That's how Andrews rolls: In a barrel of botched assignments. Over a cliff of missed second level blocks. Into a shallow stream of "my bad."

Not to pile on Andrews, but damn is this team discouraging.

Seattle runs a stretch left. I can't tell who is at fault here: Spencer or Lynch. 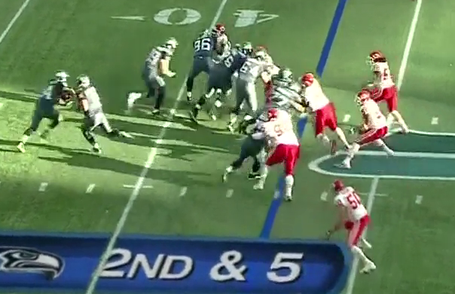 It looks like Andrews is about to peel off the double team he never really accomplished and take on Johnson, and he does. Johnson is the Chief stepping on the Hawks throat, FYI. But maybe's there's some confusion, because Spencer also drops Ron Edwards. Or maybe's he not dropped. Maybe it's just a blown block.

Either way, Lynch then runs directly into Edwards as if he has no change of direction or no compass to find a hole. Part of me says: blown block Spencer. Part of me says: confused assignments between Spencer and Andrews. And part of me says, isn't it a back's job to evade a nose tackle in space. It's not as if the backfield was swarming with defenders.

Anyway, tally another stuff. Something is very wrong with this run game. Wonder what Alex Gibbs is up to.

Seahawks split four wide. Chiefs counter with a 2-3 dime. Ben Obomanu is wide right matched against Jackie Bates. Hasselbeck takes the snap. Chiefs rush three. Seahawks block with five. Hasselbeck locks onto Obomanu and zips it low and just over the defender's shoulder. Bates isn't looking at the ball. He's watching Obo the entire way, and when Obomanu jumps and catches, Bates gets and arm in and breaks the pass up.