Seattle fell behind 14-0 after this drive. It was an ugly time to be in a Field Gulls game thread.

Part of me never recovered from that deficit, no matter the outcome.

This is Earl Thomas's job, in a nutshell.

Steve Smith runs a go up the right sideline and past Marcus Trufant. It's the only deep pattern. Carolina runs three patterns total. A curl on the left by the wide receiver, and what looks like a go or a late breaking post run by the tight end and defended by David Hawthorne and Lawyer Milloy. So, correction, that's kind of a deep pattern but the tight end isn't able to get deep before the ball is out of Clausen's hand. So Thomas should be all over Smith, but he's not.

Thomas is about ten yards away from Smith: towards the middle of the field and trailing. He has taken a bad angle and is late in his break. Though Smith probably isn't as fast as he used to be, it's very unlikely Thomas will be able to angle right and catch Smith from behind. Trufant does. Trufant delays the touchdown. Trufant does because is burned, burned, burned but close.

Then we get a series of runs that Thomas doesn't really impact.

Thomas is left of left tackle, on the one yard line. Tight end Dante Rosario is split wide left but motions to off tackle before the snap. Thomas reads the pitch and closes, but between him and Mike Goodson stand pulling linemen Ryan Kalil and Jordan Gross. Thomas almost does the improbable.

Clemons separates from Rosario and attacks, drawing Kalil. Thomas smartly stays a step apart from Gross, timing his attack. Gross and Goodson continue wide left, and as Gross is moving left, Thomas attacks his inside shoulder opposite his momentum. Gross actually falls attempting the block. 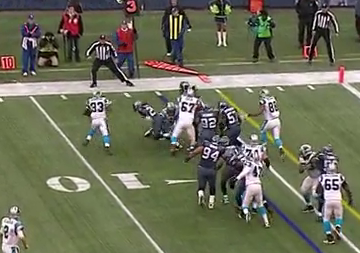 But so too does Thomas.

He lunges at Goodson but Goodson swerves left and shields himself with a stiff arm. Thomas falls to the turf. Goodson turns the corner and gets just enough to convert the first.

Thomas closes from the second level and assists David Hawthorne making the tackle. It quickly becomes a scrum.

The hole is designed to be run through the left "A" gap, but Seattle sells out to stop it. Mebane holds ground and separates and Hawthorne and Tatupu power the lead blocker back into the hole. It's shut, but another develops. 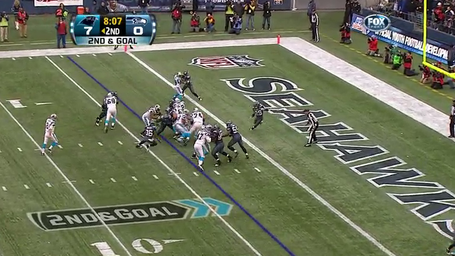 Curry is near. Thomas is the last line of defense. Junior Siavii is doubled to the turf, creating a sizable gap right of center. Thomas and Curry pinch Stewart at the goal line but he squeezes through and into the end zone.