All the best in your rehab, Deon Butler. Whatever happens from here on out, Seahawks fans that stuck through this miserable game will forever remember you. I can only imagine what it's like attempting to scoop a pass with a just-broken leg. That's legend, Deon.

I don't have any big words after this one. Teams change so much during a season. Schemes change. Health changes. Depth charts adjust. The NFL can seem almost random. The Cardinals are beating the Broncos 22-3. The 49ers just crushed the Seahawks. Sometimes it seems like football is less a battle of skill and more a narrative that is first written by talent and scheme and luck that then forms a life of its own. A 60 minute drama entitled "Never Again." Had Seattle not put together nearly back-to-back game changing plays against the Panthers, maybe Carolina would have blown the Seahawks out. Had Seattle not fallen behind by two scores halfway through the second quarter, maybe the Seahawks could have made a game of this.

But the Seahawks didn't.

The Seahawks allowed 30 points in the first half and played a completely meaningless second half. 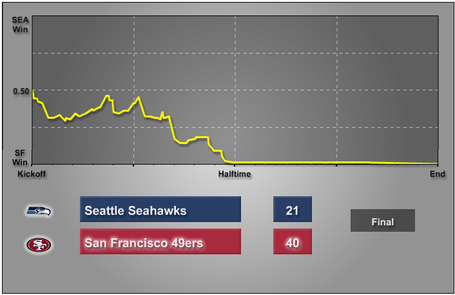 Kind of says it all.

The very concept of a playoff chase seems ludicrous now. The odds that Seattle wins the NFC West with a 7-9 record seem pretty damn good. The Rams are more or less just as bad as Seattle and Seattle hosts the deciding matchup. So, I don't know, I guess this season is destined for infamy. That's kind of novel, right? In a period of three years that has felt like continuous, oppressive, unchanging failure, this season could end with a punchline that spans the ages.

Washington had one reception for 13 yards and four rushes that didn't really go anywhere, but he is an amazing return man. It's cool how talent knows talent and how Brian Schneider has transformed the Seahawks special teams. After John Harbaugh's success in Baltimore, Schneider might even earn a head coaching interview or two. Good for him.